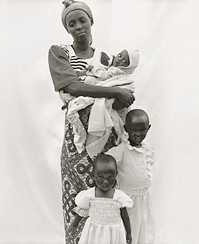 Joseline Mujawamariya was 17 on April 7th, 1994. It was the day she watched her family get slaughtered by people she had known all her life. It was the beginning of the Rwandan genocide.

She hid out in the tall grass outside her village with her twin sister for a few days, but had to move further away from home when the killers set fire to the fields. She was careful to avoid the roads because she remembered that "the Hutus would stop you to look at your fingers, your nose and ears to see if you were Tutsi."

For 2 months Joseline lived on rain water and food scavenged from gardens that were frequently filled with corpses. When the Tutsi-led Rwandan Patriotic Front swept into the country and stopped the killing she found her way back home. "There was no one left", she says. She could climb the hill and point out a mud structure in the midst of an overgrown field. "That was my home," she said, "where my parents and my brothers and sisters were all killed."

In 2003 she turned 25...with children of her own. Four years previously she was elected as her town's head of development...this in a country previously so dominated by men that a woman wasn't allowed to milk a cow.

She is now responsible for the reconstruction of Butamwe's shattered infrastructure, as well as its health services and systems of justice, education, culture, and economy. She is rebuilding for others....while at the same time desperately trying to put herself back together. A remarkable woman who deserves much more than a song.
She was 17 years
drinking the water from the rain cupped in her hands
it wasn't mixed with the blood on her land
unlike her tears
Joseline Joseline

Joseline when she came home
no one left, she was all alone
she had watched from the hills the grizzly ballet
performed by faces she'd known all her days