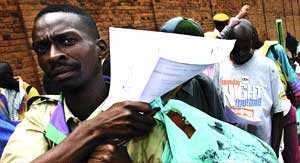 In early 2003 the Rwandan government released some 16,000 genocide perpetrators who have served up to 9 years in prison for the systematic murder of nearly 1,000,000 of their neighbors in 1994. Since only the "big fish" are being tried by the International Criminal Tribunal for Rwanda (the ICTR), many of the actual murderers are being sent home to live in the same villages where they killed.

Most of the released prisoners are self-confessed killers, although not always repentant. When one was asked why he did what he did, he replied, "We just did what we were told". Sound familiar? How about the Nuremberg defense.."We were just following orders."

Imagine convicted Nazi's being sent to live among European Jews to get a feel for what is happening in Rwanda right now.
It's been 9 long years
but now I'm coming home
they told me I could leave
said I was free to die alone
I do what I'm told
I've always been this way
tell me to turn my head
I'll surely look the other way

I'm coming home
home to my own kind
you said never again
do you mean it this time?