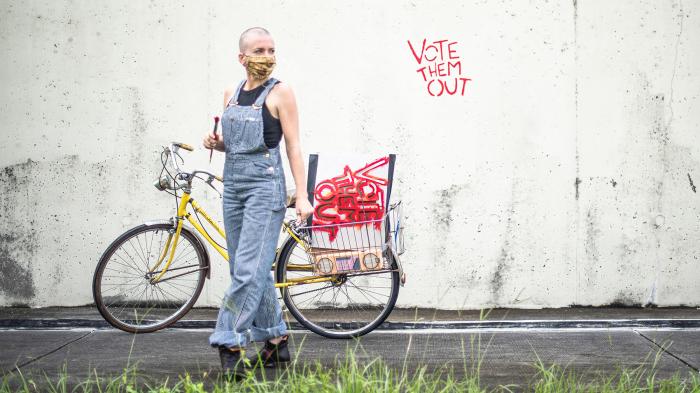 
unprecedented numbers of americans have poured into the streets for months now, in the midst of a pandemic, to demand a reckoning with white supremacy once and for all. Black Lives Matter and it is time for americans to stand up now. heed the lesson of the 2016 election: this is not a shoe-in. in november, we will need to vote in such massive numbers as to overwhelm massive corruption. not only must we vote out [#votethemout], we must vote in enough people to pass the breathe act, a visionary bill that divests our taxpayer dollars from brutal and discriminatory policing and invests in a new vision of public safety. we’ve got to vote in people all the way down the ballot who will enact meaningful policy change which rises to this historic moment and heeds the call of the american people for justice. insistent, tenacious, against-all-odds voter participation this november will become the difference between life and death for many. nothing will stem the tide of suffering from covid-19, economic crisis, police brutality, mass incarceration, endemic poverty, entrenched white supremacy and misogyny, deportation and detainment, gun violence, fire, flood, disease, pollution, irradiation, exploitation, forced reproduction, gender and sexuality-based violence and oppression, dis-information, propaganda, corruption, and greed... short of a functioning democracy! let’s harness our outrage and vote. we can do this, if we try, if we do this like it’s do or die.
the music video for "do or die" was created in collaboration with Dancing Grounds and New Orleans Dance Collective.

i recorded this song in a semi-abandoned strip mall in durham, north carolina, with some very talented musicians from that area. we all came out of isolation for the session and i wore a mask except when i was in front of a microphone singing. i didn’t know any of the players before the session. the group was put together by brad cook and included his brother phil cook on keys, yan westerlund on drums, brevan hampden on percussion and matt douglas on flute. later, my touring compadre terence higgins overdubbed some more percussion and a string quartet called delgani was added in eugene, oregon, arranged by my other touring companion, todd sickafoose. pandemic productions! -ani
Do you ever just want to give up?
well, me too
are you shocked by what people get
get used to?
do you wake up in a cold sweat?
well, that’s sane
at least you got a little brain left
you got a little brain

And if you think your vote doesn’t matter
then you’re not paying attention
yes, everything they do, they do
to keep you from their invention

Yes, if you think your vote doesn’t matter
then you’re not paying attention
everything they do, they do
to keep you from their invention