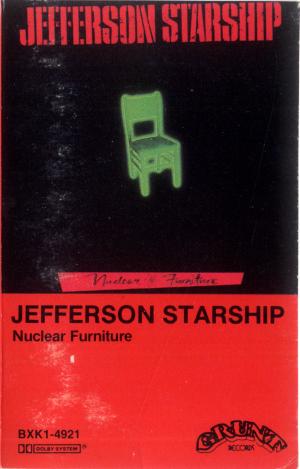 TWO stories below Whitney Street in New Haven stands the world's first tandem electrostatic accelerator - a nuclear research facility that works somewhat like a huge microscope, allowing scientists to peer into the nucleus of an atom and enabling them to explore its behavior and rearrange its structure.
The accelerator, 80 feet long and 18 feet wide in the middle, is tapered at the ends. It is painted a royal blue - Yale's color - and is called "the Emperor" because it is the biggest device of its kind. It was built in 1966 by Yale University, and its home is Yale's A. W. Wright Nuclear Structure Laboratory. 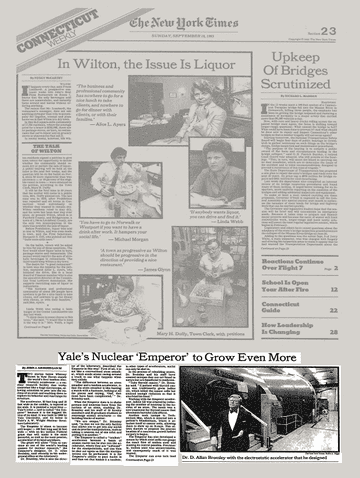 "The Emperor" is about to become still larger - 100 feet long and 25 feet wide - with an $11 million Federal grant that will make it the most powerful, as well as the most precise, accelerator of its kind anywhere.
The grant will allow "Yale to continue as one of the world's leading centers for nuclear research", "the Emperor"'s designer, Dr. D. Allan Bromley, said recently in his underground office at the laboratory.
Dr. Bromley, who is also the director of the laboratory, described "the Emperor" in this way: First of all, it is not like a conventional atom smasher, which sends atoms racing around a track to see what happens when they collide.
''The difference between an atom smasher and a tandem accelerator, is that the atom smasher is like busting a watch with a hammer, looking at all the pieces and saying, "God, that must have been complicated", Dr. Bromley said.
What "the Emperor" does is to shake protons and neutrons loose from the nucleus of an atom, enabling Dr. Bromley and his staff of 10 faculty members and 30 graduate students to rearrange atomic structures - the building blocks of matter.
"We are unique", Dr. Bromley said, "in that we are the only facility that allows you to get into any nuclei and do precise manipulations, such as taking a neutron out of one orbit and putting it in another".
"The Emperor" is called a "tandem" accelerator because a beam of atomic nuclei can be shot into the accelerator, where they are "softened" for the manipulations, and can then be shot out again so that the manipulations can be performed. It is "the Emperor"'s ability to pass nuclei in and then out that makes it a tandem; in other types of accelerators, nuclei can only be shot in.
In the process of rebuilding atoms, Dr. Bromley and his staff have created isotopes that are not found in nature but are beneficial to medicine.
"Take thyroid cancer", Dr. Bromley said. "A patient with thyroid cancer was traditionally given Iodine 131, which killed the cancer cells but emitted enough radiation so that it also fried his head".
Working with "the Emperor" accelerator, Iodine 123 was created by reducing the number of neutrons in the nucleus of an atom. The result was a new treatment for thyroid cancer that eliminates harmful side effects.
Another such isotope is Technecium 99m, which is injected into a patient's bloodstream, where it attaches itself to cancer cells, allowing them to show up on X-rays. This allows doctors to pinpoint the precise location of a cancerous growth before surgery is begun.
"The Emperor" has also developed a means by which steel mills can gauge the exact flow of molten steel and making its control possible. Previously, molten steel was uncontrollable, and consequently much of it was wasted.
"The Emperor" can even turn lead into gold, but this is essentially a stunt of no practical value. The problem with turning lead into gold, Dr. Bromley said, "is that it is not a very cost-effective process - the energy involved makes it the most expensive gold on earth".
The 57-year-old physicist is a former chairman of the National Academy of Sciences, a member of the White House Science Council and a past chairman of the American Association for the Advancement of Science.
A graduate of Queens University in Kingston, Ontario, Dr. Bromley began his career as a physics instructor at the University of Rochester. In 1955 he joined Atomic Energy of Canada Ltd., a nuclear research project, popularly referred to as Chalk River because it is on that Ontario river. He left there in 1960 to build "the Emperor".
"I started out as an English major, and I switched to electrical engineering", Dr. Bromley said. "I got into physics because it was a very exciting time during the post-World War II era. We were at a point where we were just beginning to understand what was happening at a microscopic level" to atoms.

Dr. Bromley sees an exciting future also, with the new discoveries that he believes can be made with the expanded version of "the Emperor", made possible by the $11 million grant.
The quest for a better understanding of the structure and behavior of atomic nuclei "is the greatest adventure that mankind has ever participated in", Dr. Bromley said. "We are really pushing back the frontier, and it is a lot more fun than exploring with a pith helmet and 5,000 tsetse flies".
The new accelerator has been completed in 1986. "The Emperor" will continue to operate into 1985, when it will be taken out of service so the new version can be assembled.

...And there in the dawn of the nuclear twilight
In the heart of the glowing city
She stood
Pen in hand

She wasn't perfect
But she was semi-perfect
And she remembered all about her days in Yale
Before they turned it into a sheet of radio-active glass
Thirty miles across ...
And I always used to want to think if we could sing

When the time comes...seize it
When the dream starts....believe in it
When the light shines...oh, bathe in it

Unused lyrics from lyric sheet:
What if the world was turned around?
What if nuclear plants worked?
What if nuclear bombs didn't?
What if they held nuclear disarmament?
Talks in Antarctica instead of Switzerland
(In igloos, not fancy hotels!) They'd be
Over and done
In six hours, and be on their way home
Imagine, the light
And imagined that Rose was here tonight
And there in her eyes
Was a reason to live
A reason to fight
A reason to die
It scared me....it elevated me
I would do things for her
That I wouldn't do for my mother
My country
My lover
Tis of thee
I sing
Sweet girl of liberty
Sweet bird of freedom