[1997]
Lyrics and music by Jim Page
Album: Heroes And Survivors 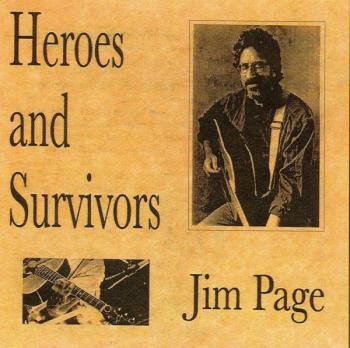 One family of Irish officials treated their 'red brethren' with humanity, but Scots-Irish President Andrew Jackson
oversaw the tribe's ruthless eviction from their lands. 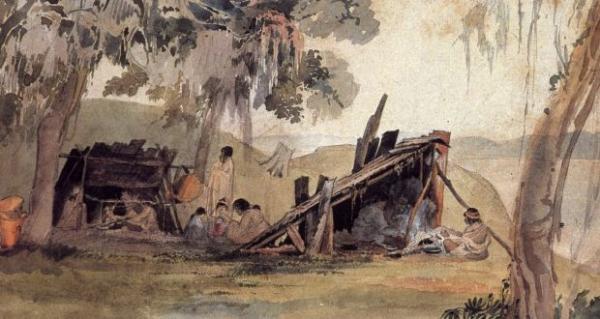 circa 1833: A Choctaw Indian encampment on the Mississippi River. Original Artwork: Painting by Karl Bodmer. (Photo by MPI/Getty Images)


On that spring day, as Major William Armstrong surveyed those who had gathered in the small timber agency where he lived, he must have experienced mixed emotions. For one thing, the meeting had been summoned to raise money for “the relief of the starving poor of Ireland”, the birthplace of his own father.
For another, while the crowd included many missionaries and traders, much of the $170 subscribed at day's end would come from the chiefs of the Choctaw Nation, who were also present.
Major Armstrong had known these Choctaw men for many long years, having served as the US government's chief agent in the region since 1832. He had been with them through the “Trail of Tears”, in which perhaps as many as four thousand Choctaw men, women and children perished when they were bullied out of their ancestral homelands and forced to cross the River Mississippi.
The major's wife, Nancy, and his older brother Frank had been as keen as he was to help the Choctaw, but both died in the wake of the Trail of Tears. And when the 52-year-old Armstrong himself succumbed in the summer of 1847, less than three months after the Skullyville meeting for the “white brethren of Ireland”, the chief of the Choctaw Nation, Colonel David Folsom, would recall him as “our father and our friend”.
Oral histories collected in the nineteenth century include tantalising suggestions that the ancestors of the Choctaw Nation were hunting for mammoths over 12,000 years ago. Nanih Waiya, an ancient grass-covered earth mound held sacred by the Choctaw, lay at the heart of their ancestral lands in the Mississippi region.
During the eighteenth century they traded with French, British and Spanish alike, but following the Treaty of Hopewell (1786) they became close allies of the United States itself.

When Britain went to war against the US in 1812, many Choctaw warriors served in the American army of Andrew Jackson, particularly during the crushing defeat he inflicted on the Creek Indians, Britain's erstwhile allies, as well as in the successful rescue operation of two hundred Tennessee Riflemen from a British ambush.
David Folsom was among the 50 or 60 young Choctaw warriors who were still with Jackson's army when he annihilated the British at the Battle of New Orleans in 1815.
However, the Choctaw's credit with Jackson amounted to little when he became President of the United States fourteen years later. During the 1830s “Old Hickory” Jackson was responsible for transplanting numerous American Indian tribes, including the Choctaw, over the western frontier and appropriating their ancestral lands for settlement.
Jackson, whose parents were both born in Co Antrim, Ireland, had barely been elected to the White House when he persuaded Congress to pass the Indian Removal Act in June 1830, thereby legitimising his ruthless eviction policy. 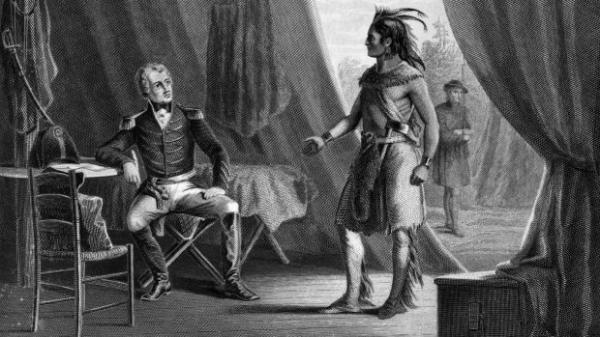 1814: William Weatherford, also known as Chief Red Eagle, surrenders to future Us president Andrew Jackson (1767 - 1845), after the Creek Indians were defeated at the Battle of Horseshoe Bend in Alabama. Many Choctaw fought with Jackson. (Photo by MPI/Getty Images) 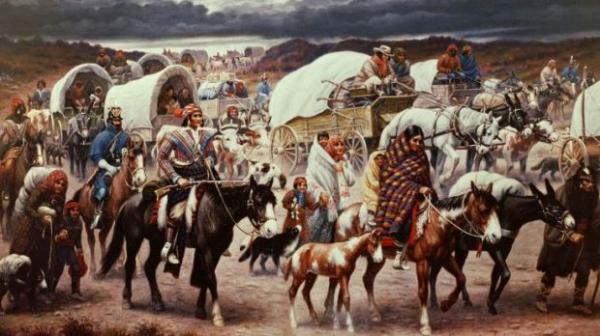 The Trail of Tears, in which perhaps as many as 4,000 Choctaw men, women and children perished