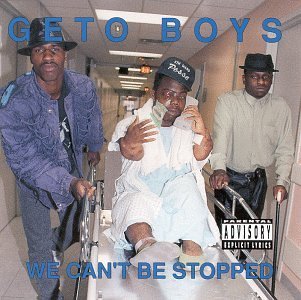 Recorded during the First Gulf War, Bushwick is saying he’s not going to go out and fight for the U.S. Army in some foreign country only to get injured with little compensation, or worse.
Hello, could I speak with Bushwick Bill?
Hello, this is Bushwick motherfucking Bill
Yes, sir, I'm calling to inform you that you have been uh drafted into the United States military
The United States wants me for what? Hahaha
Excuse me, sir?
Hahaha
Bushwick?
Hahaha, yeah, yeah, yeah, hey what's up?
You need to uh contact your nearest recruiting office immediately, please
I see you're not hip to what's happenin'
I don't give a fuck about you and all that bullshit you stressin'
Fuck a war
To explain, let me kick it to you a little something like this

Motherfuck a war, that's how I feel
Sendin' a nigga to a desert to get killed
'Cause two suckas can't agree on something
A thousand motherfuckers dying for nothing
You can't pay me to join an army camp
Or any other motherfuckin' military branch
Of this United goddamn States of that bitch America
Be a soldier, what for?
They puttin' niggas on the front line
But when it comes to gettin' ahead, they put us way behind
I ain't gettin' my leg shot off
While Bush's old ass on TV playin' golf
But when you come to my house with that draft shit
I'ma shoot your funky ass, bitch
A nigga'll die for a broil
But I ain't fightin' behind no goddamn oil
Against motherfuckas I don't know
Yo, Bush! I ain't your damn ho
The enemy is right here G, them foreigners never did shit me
All of those wasted lives
And only one or two get recognized
But what good is a medal when you're dead?
Tell Uncle Sam I said

In Vietnam a lot of niggas died young
P.O.W.'s got hung
What the fuck do I know about a grenade
All I know is the couch and my 12 gauge
And what if that pin gets stuck?
Several more casualties show up
This shit remind me of a drive-by
More motherfuckers die by accident than on purpose, why?
'Cause they don't know what they doin'
They see if the coast is clear and they start pursuin'
And that's when that booby trap springs, boom!
Blow a motherfucker to smithereens
They send a sucker to your folks, lookin' stupid
Tellin' them you died in the line of duty
Or your ass is missing in action bro
Tryin' to be a damn hero
They bring your folks that duffel bag
The only shit they wanna see is that doggy tag
Hopin' that the worryin' will cease
And your ass will still be in one damn piece
But my mom ain't gotta worry about that there
'Cause I ain't dyin' in the middle of nowhere
Another statistic, a body in a drawer
Man! motherfuck a war!

You're lucky that I ain't the president
'Cause I'll push the fuckin' button and get it over with
Fuck all that waitin' and procrastinatin'
And all that goddamn negotiatin'
Flyin' back and forth overseas
And havin' lunch and brunch with the motherfuckin' enemy
I'll aim one missile at Iraq
And blow that little piece of shit off the map
Yeah, I wouldn't give a fuck who dies
'Cause I'm tired of payin' these high ass gas prices
Only the rich benefit, it'll be a cold day in Hell before I enlist
To eat shit out a can like a worm
And everyday wear the same fucking uniform
Sores breakin' on my funky ass feet
Skin crawlin' 'cause I ain't took baths in weeks
Not knowin' if I'm comin' home or not
And if I do, I'll probably be shell-shocked
I couldn't get a job, just a free burial
You know how Uncle Sam treat its veterans
Absolutely no respect
Get a plate in your head, lose a leg, you might get a check
Or a goddamn star, you can have that shit
Motherfuck a war!