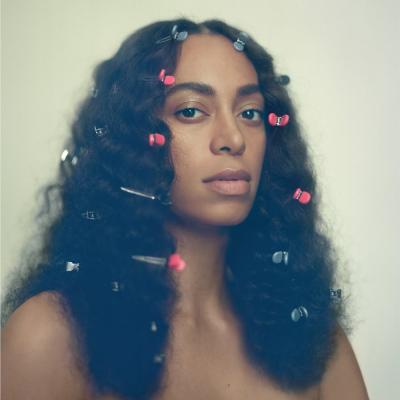 One of the tracks is called "F.U.B.U.," which stands for "For us by us." I read that your working title for the song was "Be Very Afraid." When you talk about choosing optimism over pessimism, "For us by us" versus "Be very afraid" is a pretty stark contrast.

It is, it is. And to be honest, "F.U.B.U." was the song I had the hardest time writing in terms of conceptualizing. Before, that song specifically was about people being afraid of us and fear being at the root of so many murders from policemen, so many murders that we have constantly seen in the past few years. And it was really, really hard for me to put that in a four-minute song. And I kept trying, and I kept trying, and it hurt so much and it was so painful for me and it was so sad. And one day, I put on the track again, probably the fifth or sixth variation of the song, and I swear it just felt like God speaking through me. I wrote it probably in six minutes. And it was just one of those moments where it really did not feel like it was just me.

And that is where I drew "For us by us." Because not only did I mean it, you know, in the obvious way. But it really was written by us. These are incidents that all of my friends go through on a daily basis. These are incidents that, by the way, you know, Oprah and Dr. Dre have expressed that they're going through — and they're billionaires ... And also there's a certain tonality of that song that also speaks to — when you exist as an unafraid and powerful black presence in this country, what happens as a result of that? And kind of the breaking down that people try to do on a daily basis when you present yourself in that way, which is something that I've really struggled with.

NPR - 'We've Always Had A Seat At The Table': Solange On Conversations That Heal
One for us

All my niggas let the whole world know
Play this song and sing it on your terms
For us, this shit is for us
Don't try to come for us

All my niggas got the whole wide world
Tell them niggas that it's all our turn
This us, some shit is a must
Some shit is for us

When you know you gotta pay the cost
Play the game just to play the boss
So you thinking what you gained, you lost
But you know your shit is taking off, oh
When you driving in your tinted car
And you're criminal, just who you are
But you know you're gonna make it far, oh

When you feeling all alone
And you can't even be you up in your home
When you even feeling it from your own
When you got it figured out
When a nigga tryna board the plane
And they ask you, "What's your name again?"
Cause they thinking, "Yeah, you're all the same."
Oh, it's for us

When it's going on a thousand years
And you pulling up to your crib
And they ask you where you live again
But you running out of damns to give, oh
I hope my son will bang this song so loud
That he almost makes his walls fall down
Cause his momma wants to make him proud
Oh, to be us

And we bomb on sight, on sight we must charge
Host of my emotion, it's your call
Liquor in my system, we must crawl
Addiction, disobey the law
Don't clip my wings before I learn to fly
I didn't come back down to Earth to die

All my niggas in the whole wide world
Made this song to make it all y'all's turn
For us, this shit is from us
Get so much from us
Then forget us