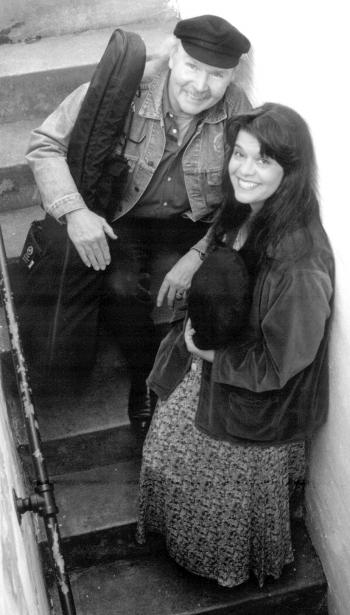 She was born dirt poor, grew up gangly and tall
and the state gave her no real protection at all.
Her father’d get drunk and he’d beat her so bad
and her mother wouldn’t help, her man was all that she had.

At school her teachers just closed their eyes
to the bruises on her arms, on her neck and her thighs.
She was learning that the world was bitter and cold.
She was only a child but she was already old.
Family ties … Under American skies

As she grew up she learned to close down her heart
she turned away from love, she wouldn’t let love start.
When a man tried rape in a west-Texas rain
she left him dyin’, writhin’ in pain.

Like a wounded animal, she lashed out mean
doin’ what she’d learned, doin’ what she’d seen.
But that kind of justice never heals the hurt
and her tears mixed with blood on her raggedy shirt.
Anger cries … Under American skies.

When we ended slavery – we all went free.
When we stopped child-labor – that was victory.
When women started voting – true democracy
but we still haven’t made it and we can’t let it be …
when we’re a part of a system – against it or willing
and every last time that the state does the killing
a part of us dies … Under American skies.

They caught her down by the Santa Fe tracks
and the paper called her one of those drug maniacs.
The rapist was a member of society
so, she got no bail – she got a lawyer for free.

That court-appointed lawyer had a vacant smile
he raised no objections and he slept through the trial.
Just like her dad, he had booze on his breath.
The jury said “guilty” and the judge said “death”.
Pity flies … Under American skies.

They sent her to Huntsville.They sent her to hell.
They sent her up to Terrell to a lock-down cell.
She sat on her cot a couple years crept by
her appeals ran out and she prepared to die.
Her final dress was just a hospital gown
they put her on a gurney and they strapped her down.
Put needles in her arm, under surgical tape
and seven minutes later she had made her escape.