I'm Sick of This Blooming War 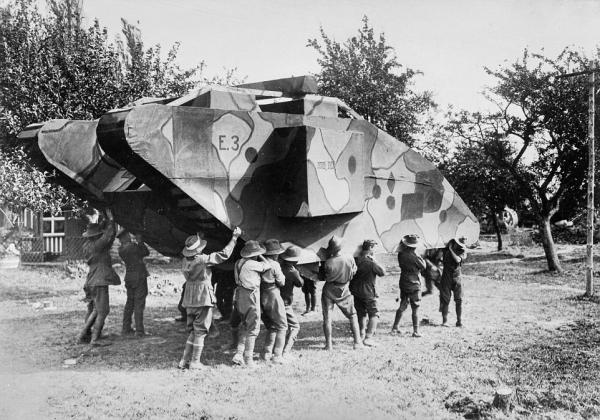 
Nella raccolta curata da Frederick Thomas Nettleingham, sottoufficiale di Sua Maestà, e intitolata “More Tommy's Tunes: An Additional Collection of Soldiers' Songs, Marching Melodies, Rude Rhymes and Popular Parodies, Composed, Collected, and Arranged on Active Service with the B.E.F.”, pubblicata a Londra nel 1918.
You King and Country need you
Be a soldier, little man
I thought I'd like to swank a bit
So joined and here I am
I left the Missis (bless her heart)
I says, "Don't cry, old dear
We'll damned soon beat the Germans
And at Xmas be back here."
That was August, Nineteen-Fourteen
A mug I must have been
'Cos the Missis, she keeps asking me
What Xmas did I mean.

Oh ! I'm sick of endless drilling
And of sandbags ever filling
What the "Hec" did Billy Kaiser start it for?
What with issue fags and baccy.
And shirts that's always chatty
I'm just sick of this blinking blooming war.

When we've been up in the trenches
For perhaps about a year
They bring us down the line again
What for, is not quite clear
We're out for a rest they tell us,
But we're damned near worked to death
And then we're up the line
Before we get our blinking breath
Now after three years' fighting
I thought, this is getting rough
To my pals I. said, "I'll swing the lead
Of France I've had enough."

But I nearly came a cropper,
When I went to see the Doctor
He was handing number 9's out by the score
When he says, "What's wrong with you ?"
I says, "Doc, 'twixt me and you,
I'm just sick of this rotten blinking war."