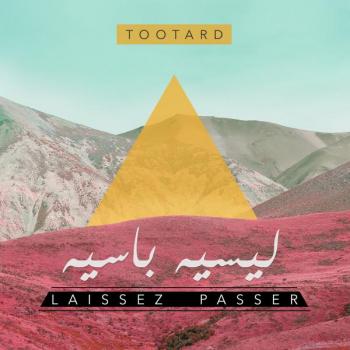 
TootArd are a band from the village of Majdal Shams in the Israeli occupied Golan Heights. The area, originally Syrian territory, has been part of Israel since 1967, but the inhabitants don’t have Israeli citizenship. Instead of a passport, they have a ‘laissez-passer’, or ‘let him pass’. They are officially stateless, or ‘undefined’.
It’s hardly surprising that TootArd’s unique situation has shaped their music as it has their lives. In a place like the Golan Heights “politics” is not a dirty word or an annoying pastime for hermits glued to computers and phones, it’s simply a fact of life.
The good news is that Laissez Passer, their second album, is an uplifting, eclectic, funky, highly danceable party of a record. TootArd have combined their various influences –tuareg, West-African, Arabic music and reggae into a unique trademark sound. The lyrics deal with their geopolitical situation in both a matter-of-fact way and a whimsical, romantic, even poetic fashion. A common metaphor is that of a bird, signifying freedom from oppression, the band members’ individual journeys to various parts of Europe, and presumably, their restless quest to combine different styles of music into something all their own.
The closest parallel I can think of musically is Bombino, the Tuareg electric guitarist whose blues-influenced music was brought to a Western audience by Black Keys guitarist Dan Auerbach. A sense of longing, the wide open spaces of the desert and the mountains, and an infectious optimism are all characteristics of this record.
Opener “Laissez Passer” bursts out of the speakers with a driving electro-acoustic beat that suggests an Arabian dance club as much as a party in the middle of the desert. Hasan Nakhleh‘s guitar playing shows how blues and Hendrix-inspired playing can blend perfectly with North African and Arabic melodic sensibilities. ‘I do not exist on the ID card, a string and a piece of wood are my gunpowder’.
folkradio.co.uk

I do not exist on the ID card
A string and a piece of wood are my gunpowder
Without a nationality, without borders
And if you ask me I would say
I play the ´oud

With music I become a flying bird
I change my feathers, I change my strings
Between my letters…words of fire
Arabic, African, ´oud, and guitar