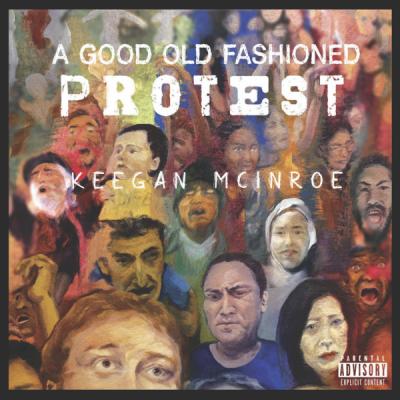 It is a protest for unity, compassion, reason, action, and love.

I lend my voice to the chorus of voices around the world calling for a peaceful, humane, respectful, enlightened tomorrow.
I was awoke last night from a beautiful dream
The world had finally come together it seemed
There were men and women of varied faith and color
Laughing and singing and loving each other
Ah but then I’s awoke
Into what some have dubbed our pseudo-modern age
A real waking nightmare.

He said: “Terrorism is the scourge of our day
And they want us all dead, make no mistake
And if we don’t kill ‘em away over there
They’ll be coming to kill us away over here!
Crossing the border in droves
With sex-crazed Mexi-cans stealing jobs, no less
Time to build a wall!”

And he continued: “Terrorists hate us ‘cause we’re the land of the free
The home of the brave, yeah let freedom ring!
They hate all our churches and movies and music
They hate you for not bowing five times in public.
Gonna win this War On Terror!”
I noticed he didn’t mention all our bombs or coups or drones or secret prisons or CIA or killin’
They must like them just fine.

He reminded me of how freedom ain’t free
And ain’t nobody safe unless we let the government see
With a camera on every road and street corner
And an ear in each phone and a nose in each drawer.
“That’s right friends! Big Brother needs to sniff your drawers!”
Well ya never know what might be hiding out in the medicine cabinet at Grannie’s
Might be something terribly holistic or natural or a terrorist or an unsanctioned glass of milk!”

He proceeded to race wars right here at home
How the blacks and the whites can’t get along
How the browns and the reds and the greens and the scarlets
Hate all those yellows and oranges and violets
“Let the Rainbow Wars begin!
And look, Bob, now the gays and the straights are having it out in the streets.
What a fantastic distraction of a circus!”

“And the men hate women and the women hate men
And there’s a battle concerning where a trans can go piss,”
And the small tiny text scrolls beneath his desk
With news of a wedding party blown up in Iraq.
Ah I’d sure like to change the channel.
But this man…has…such…beautiful…teeth…

Then he cried:  “The Left and Right can’t stand each other.
We’re a dee-vided nation of bickering brothers
And though approval has sunk to an all time low
The incumbents have won the majority vote.”
Blow the horn and stamp your feet!
Give me more of these smoke and mirrors.
I think I just saw Edward Bernays laughing doing somersaults in the parking lot of a Ford dealership!

He shouted: “Now listen up friends ‘cause this is important!
There’s unsanctioned news, and it’s spreading like poison.
So if you don’t hear it from this horse’s mouth
Or if it conflicts with what I spit out
Just know it’s fake!
Yeah the worlds amuck with truth-threatening conspiracy theories, foreign propaganda, and the meddlings of Russian secret agents like that albino pederast Julian Ass-ange!

Now my head and my heart were heavy with fear
And his voice continued its assault on my ears
When Providence graciously intervened with a favor
“We interrupt this report with breaking news of Justin Bieber.”
Seems he’s been a bad, bad boy
Driving too fast somewhere round Florida in a black, suped up sports car
Stop the presses boys! What’s that?
Turns out he was wearing women’s underwear at the time?…lace?…looks to be indigo in color…just one string going all the way up….