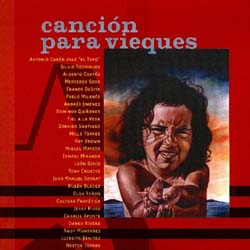 The US Navy bombing tests and military practice on the island of Vieques, Puerto Rico, has ended. On May 1,2003, citizens in Vieques celebrated the first day in over 60 years without a US Navy bombing run.

Puerto Ricans of Vieques objected to the US Navy's presence across many other ideologically divisive issues regarding the US. Until recently, the US Navy owned over two-thirds of Vieques. When the US bought this land in the 1940s, many families and farmers were forced out of their homes and off their lands to make way for military exercises, which began in 1947.

Bush announced that the Navy would leave Vieques in June 2001, and it is widely accepted that it was the success of the protest movement that led to the this decision and to the US Navy's withdrawl.

While resistance to the Navy's military exercises was ongoing, it was not until 1999, when a civilian security guard was killed by a bombing accident, that popular resistance began to have a lasting effect on US policy.

Many problems remain in Vieques, however. Environmental destruction and unexploded ordinances ravage the land. The land has not been returned to the people of Puerto Rico, rather, it has been transferred to the US Department of Fishing and Wildlife, so that an environmental assessment can be obtained. Early Puerto Rican estimates have produced a figure of $400 million necessary to clean up the land used by the US Navy, but only $23 million has been allocated so far. 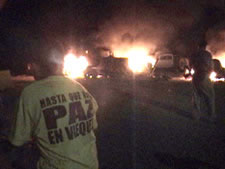 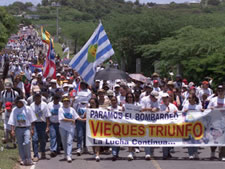 The island tells its history
Surrounded by fire waves
the entire journey that goes through its history
goes surrounded with a veil of fear.

Sixty years wide-awake
By “Bombs of Peace” at night,
keeping warm the children with psalms
by the rhythm of detonations.

Sixty years with rain
of uranium and ammunition
cleaning the dirty powder of windows
just waiting the cancer to react.

And for that reason the fishermen,
In name of their illusions,
anchor their boats without staterooms
at front of aircraft carriers.

And thus was that their voice grew louder, with your voice
and by the love of the same things
today we share ourselves in song.

The island asks its history
why they left behind its dreams
Tanks in the ground and military ships
have diminished our sky.

Sixty years of insomnia
just to train citizens
which are going to fight for a world-wide peace
Enjoyed by other human beings.

And for that reason women and men
become shields of life
and populate banned beaches and run ashore
with all the truths united.