The Ballad of Major Eatherly 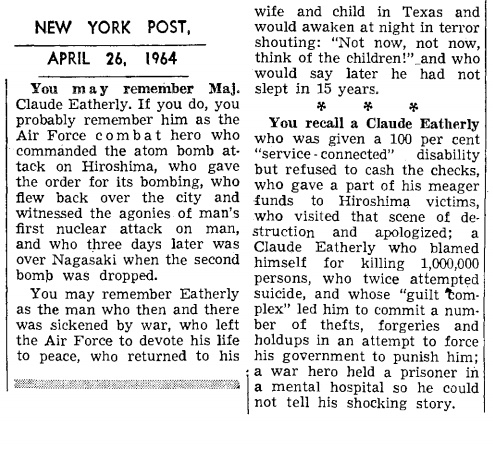 Major Eatherly, coinvolto nello sgancio della bomba di Hiroshima, in quanto pilota del ricognitore Straight Flush dal quale dette il via libera all'Enola Gay per sganciare la bomba, soffrì dopo la guerra di depressione e tentò più volte il suicidio.
Tell me Major Eatherly what's troubling your mind?
Your dream of children burning whom you have left behind,
Who thru the flames are running with their bodies burned & blind,
And why haven It you for-gotten for your deed is far behind?

You flew the big B-29's back in World War Two
It was hard to stay your hand then when the Germans killed the Jews
So you'd left your wife at home, and you'd left your children too
For the nation was at war and so what else was there to do?

From nineteen-forty-one 'til July of forty-five
You'd seen the blood and the wounded, and the men who were to die
Long hours of staring at the sea, only hoping to survive
The bloody dark Pacific rolling 'neath the bloody sky.

The sixth of August was the day, they said the end was near
If you'd fly scout for the A-Bomb to find a city that was clear
Dreaming of home and sick of war your conscience could not hear
So your plane doomed Hiroshima to the fire and to the fear.

In Galveston in Texas in nineteen sixty-four
You hold a toy gun in your hand as you rob a grocery store
Long ago Japan surrendered, burned and shattered to the core
Do you think that you can hide your guilt behind that prison door?

This is not the first time they've locked you in your cell
The asylum for the insane has seen your face as well
Your family's kicked you out and when you're drunk and you all
There'll be no one to understand, There'll be no one at all.

So why must you bear all this guilt for that one fearful blow?
You were just obeying orders, you just fought the hated foe
Are there no more men alive to share your heavy guilt?
Or did that last man die upon that cross the Romans built?

Good news. It seems he loved them after all.
His orders were to fry their bones to ash.
He carried up the bomb and let it fall.
And then his orders were to take the cash,
A hero’s pension. But he let it lie.
It was in vain to ask him for the cause.
Simply that if he touched it he would die.
He fought his own, and not his country’s wars.
His orders told him he was not a man:
An instrument, fine-tempered, clear of stain,
All fears and passions closed up like a fan:
No more volition than his aeroplane.
But now he fought to win his manhood back.
Steep from the sunset of his pain he flew
Against the darkness in that last attack.
It was for love he fought, to make that true.

To take life is always to die a little: to stop
any feeling and moving contrivance, however ugly,
unnecessary, or hateful, is to reduce by so much the total
of life there is. And that is to die a little.
To take the life of an enemy is to help him,
a little, towards destroying your own. Indeed, that is why
we hate our enemies: because they force us to kill them.
A murderer hides the dead man in the ground:
but his crime rears up and topples on to the living,
for it is they who now must hunt the murderer,
murder him, and hide him in the ground: it is they
who now feel the touch of death cold in their bones.
Animals hate death. A trapped fox will gnaw
through his own leg: it is so important to live
that he forgives himself the agony,
consenting, for life’s sake, to the desperate teeth
grating through bone and pulp, the gasping yelps.
That is the reason the trapper hates the fox.
You think the trapper doesn’t hate the fox?
But he does, and the fox can tell how much.
It is not the fox’s teeth that grind his bones,
It is the trapper’s. It is the trapper, there,
Who keeps his head down, gnawing, hour after hour.
And the people the trapper works for, they are there too,
heads down beside the trap, gnawing away.
Why shouldn’t they hate the fox? Their cheeks are smeared
with his rank blood, and on their tongues his bone
being splintered, feels uncomfortably sharp.
So once Major Eatherly hated the Japanese.

Hell is a furnace, so the wise men taught.
The punishment for sin is to be broiled.
A glowing coal for every sinful thought.
The heat of God’s great furnace ate up sin,
Which whispered up in smoke or fell in ash:
So that each hour a new hour could begin.
So fire was holy, though it tortured souls,
The sinners’ anguish never ceased, but still
Their sin was burnt from them by shining coals.
Hell fried the criminal but burnt the crime,
Purged where it punished, healed where it destroyed:
It was a stove that warmed the rooms of time.
No man begrudged the flames their appetite.
All were afraid of fire, yet none rebelled.
The wise men taught that hell was just and right.
‘The soul desires its necessary dread:
Only among the thorns can patience weave
A bower where the mind can make its bed.’
Even the holy saints whose patient jaws
Chewed bitter rind and hands raised up the dead
Were chestnuts roasted at God’s furnace doors.
The wise men passed. The clever men appeared.
They ruled that hell be called a pumpkin face.
They robbed the soul of what it justly feared.
Coal after coal the fires of hell went out.
Their heat no longer warmed the rooms of time,
Which glistened now with fluorescent doubt.
The chilly saints went striding up and down
To warm their blood with useful exercise.
They rolled like conkers through the draughty town.
Those emblematic flames sank down to rest,
But metaphysical fire can not go out:
Men ran from devils they had dispossessed,
And felt within their skulls the dancing heat
No longer stored in God’s deep boiler-room.
Fire scorched their temples, frostbite chewed their feet.
That parasitic fire could race and climb
More swiftly than the stately flames of hell.
Its fuel gone, it licked the beams of time.
So time dried out and youngest hearts grew old
The smoky minutes cracked and broke apart.
The world was roasting but the men were cold.
Now from this pain worse pain was brought to birth,
More hate, more anguish, till at last they cried,
‘Release this fire to gnaw the crusty earth:
Make it a flame that’s obvious to sight
And let us say we kindled it ourselves,
To split the skulls of men and let in light.
Since death is camped among us, wish him joy,
Invite him to our table and our games.
We cannot judge, but we can still destroy.’
And so the curtains of the mind were drawn.
Men conjured hell a first, a second time:
And Major Eatherly took off at dawn.

Suppose a sea-bird,
its wings stuck down with oil, riding the waves
in no direction, under the storm-clouds, helpless,
lifted for an instant by each moving billow
to scan the meaningless horizon, helpless,
helpless, and the storms coming, and its wings dead,
its bird-nature dead:
Imagine this castaway,
oved, perhaps, by the Creator, and yet abandoned,
mocked by the flashing scales of the fish beneath it,
who leap, twist, dive, as free of the wide sea
as formerly the bird of the wide sky,
now helpless, starving, a prisoner of the surface,
unable to dive or rise: this is your emblem.
Take away the bird, let it be drowned
in the steep black waves of the storm, let it be broken
against rocks in the morning light, too faint to swim:
take away the bird, but keep the emblem.
It is the emblem of Major Eatherly,
who looked round quickly from the height of each wave,
but saw no land, only the rim of the sky
into which he was not free to rise, or the silver
gleam of the mocking scales of the fish diving
where he was not free to dive.
Men have clung always to emblems,
to tokens of absolution from their sins.
Once it was the scapegoat driven out,
bearing its load of guilt under the empty sky
until its shape was lost, merged in the scrub.
Now we are civilized, there is no wild heath.
Instead of the nimble scapegoat running out
to be lost under the wild and empty sky,
the load of guilt is packed into prison walls,
and men file inward through the heavy doors.
But now the image, too, is obsolete.
The Major entering prison is no scapegoat.
His penitence will not take away our guilt,
nor sort with any consoling ritual:
this is penitence for its own sake, beautiful,
uncomprehending, inconsolable, unforeseen.
He is not in prison for his penitence:
it is no outrage to our law that he wakes
with cries of pity on his parching lips.
We do not punish him for cries or nightmares.
We punish him for stealing things from stores.
O, give his pension to the storekeeper.
Tell him it is the price of all our souls.
But do not trouble to unlock the door
and bring the Major out into the sun.
Leave him: it is all one: perhaps his nightmares
grow cooler in the twilight of the prison.
Leave him; if he is sleeping, come away.
But lay a folded paper by his head,
nothing official or embossed, a page
tom from your notebook, and the words in pencil.
Say nothing of love, or thanks, or penitence:
say only ‘Eatherly, we have your message.’