Between Me, You & Liberation 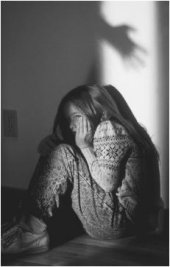 Violenza sulle donne: come e peggio della guerra
She rested her head upon my chest
Sensed liberation in between breaths
Wonder is sex is what she found
Peace, found it laying down with men

Wasn't there to judge her, many ways I loved her
It was more than bodies we shared with each other
We lay under the cover of friends
A place where many lovers began

I began to feel her body shake in my hand
Body language, it's so hard trying to understand
Usually after sex it's a good feel
Took by silence, emotion stood still

I could feel tears spill from her grille
Hurt from before that began to build
She told me hold me, a story she assembled it
Tellin' it, trying not to remember it

Felt pitiful she had only learned
To love inside the physical, inside it burned
My heart turned, I thought of what this man did
She forgave him, she grew to understand it

Sometimes I wish a careless whisper
Serenade her without speaking a word
Because of you I'm stronger, I'm no longer
I feel so alive, you have liberated me

She laid, I watched her breathe
Happy to be here, not afraid to leave
I couldn't conceive her not being here
Death in her face, her not having fear

I stare with my eyes closed
Wonder when the body leave does the mind go?
Watchin' Jordan became less important
Seeing this disease eating away my aunt's organs

Sometimes I wish a careless whisper
Serenade her without speaking a word
Because of you I'm stronger, I'm afraid no longer
I feel so alive in me, you have liberated me

He spoke with his eyes, tear-filled
A lump in his throat, his fear built
My whole life it was in steel
This ain't the way that men feel

A feeling he said he wished he could kill
A feeling not even time could heal
This is how real life's supposed to be?
For it to happen to someone close to me?

So far we'd come for him to tell me
As he did insecurity held me
I felt like he failed me
To the spirit, yelled help me

Now there was no way for him to ignore it
His parents found out and hated him for it
How could I judge him?
Had to accept him if I truly loved him

Sometimes I wish a careless whisper
Serenade her without speaking a word
Because of you I'm stronger, I'm afraid no longer
I feel so alive in me, you have liberated me