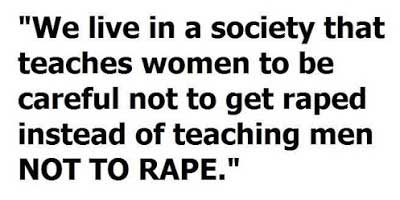 The Fugazi anti-rape track “Suggestion” is written from the perspective of a female, speaking out against sexual harassment and assault. At Fugazi show in 1991 at Washington, DC community hall, they asked Fire Party’s Amy Pickering to perform the visceral track to make the socially conscious track intensely more personal.

“Why can’t I walk down the street/Free of suggestion?/Is my body my only trait/In the eyes of man?”

Pickering recites MacKaye’s original writings and delivers the track ranging from a whispered inquiry to a raging accusation. “Suggestion’s” power and versatility was also demonstrated in 1988 at a show in Washington, mere days after a violent skinhead, white power demonstration had abused and assaulted members of the gay community in the same town. Mackaye performed and dedicated this song, usually about the victimization of women at the hands and eyes of men, and turned the tune into a song about homosexuals being attacked in the park at night (Tyler-Ameen, 2011).

Fugazi’s Blueprint Suggestion More Than a Minor Threat
Why can't i walk down a street free of suggestion?
Is my body the only trait in the eye's of men?
I've got some skin
You want to look in
There lays no reward in what you discover
You spent yourself watching me suffer
Suffer you words, suffer your eyes, suffer your hands
Suffer your interpretation of what it is to be a man
I've got some skin
You want to look in
She does nothing to deserve it
He only wants to observe it
We sit back like they taught us
We keep quiet like they taught us
He just wants to prove it
She does nothing to remove it
We don't want anyone to mind us
So we play the roles that they assigned us
She does nothing to conceal it
He touches her 'cause he wants to feel it
We blame her for being there
But we are all guilty