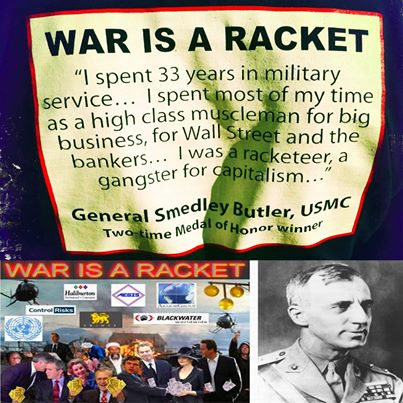 Robert S. McNamara said in the documentary film by Errol Morris, "Fog of War", that "in order to do good you may have to engage in evil". But what if you don't want to do good? What if you want to do evil? Then you must make it look good, right?

Examples include: Green washing, "making the world safe for democracy" via rigging elections, backing corporate-friendly autocratic political leaders and military invasions of sovereign states that have large deposits of valuable resources in their territory and democratically elected socialists or populists, as well as pink-washing, historical revisionism (Columbus Day and Thanksgiving are perfect examples), social cleansing for purposes of "urban renewal" a.k.a. gentrification, minimizing the scope of political options in elections and calling it "democracy", omitting information in supposedly objective news reports to make Israel's occupation via illegal settlements look like victims of Palestinian incivility - even though Israel is the foreign occupier and provocateur, culture accumulation being justified deceptively by calling it "honor", and "making Christians" of those dehumanized by the title of "heathen" or "barbarian", as well as what is implied by terms such as "kill the Indian to save the man", or such as in Stanley Kubrick's movie "Full Metal Jacket" there was the superior officer who stated "inside every gook is an American trying to get out". In communities and families, individual relations etc., there is the notion that misogyny is actually just men being "protectors" of women, which renders women to inferior second-class status, and the man's narcissism and delusions of grandeur being construed as will-power and confidence, or simply "masculinity".

One of the more shocking examples is undeniably sexual abuse of women and children committed by those who are socially trusted by their titles - such as priests, pastors, scout leaders, teachers, police, etc., or for that matter why do you suppose it's common to call a sleazy strip bar in a drug and organized crime infested red light district a "gentleman's club"? Or better yet calling pimps and solicitors of prostitution "sugar daddies". The white supremacist militias who terrorize Latino communities usually name their organizations to make them seem like they are just trying to defend something innocent, such as "Civil Defense Corps". One of the worst in the 20th century (the Cold War was underway) was when fanatical political leaders like Pol Pot referred to mass murder as liberation, or freeing people from themselves. Another similar example via institutional racism is cutting off mostly non-white and mostly poor communities from vital social programs needed to make up for the historical denial of access to college, capital, and any form of equality in opportunity, while spinning it as being done for their own good, so they can be free from being dependent on welfare, while the very corporations pushing for these cuts are themselves far more dependent on welfare. As well are social cleansing policies dubbed "tough love" to "brow beat [the homeless] into helping themselves" - words I've personally heard Governor and former Mayor John Hickenlooper (D-CO) use regarding his policy adopted mostly from former Mayor Rudy Giuliani (R-NY).

So many more examples will reveal themselves if you just look for them. 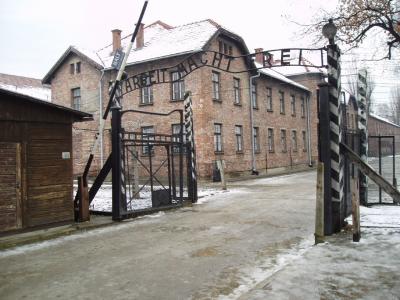 In the song picture is the front gate of Auschwitz, where the Nazi government of Germany during the 1930s and 40s sent millions of partisans (leftists), Romani people (Gypsies), Jews, homosexuals etc. to their deaths - what is now commonly called the holocaust. The slogan on the front gate says "work will set you free".
Don't take without asking unless your question's worded shrewd
Such assertive friendliness is so subtly rude
A drop of suicide just to lighten up the mood
It is gourmet cooking but you call it soul food
The only reason you got away with cooking it, dude..

Cover up the bodies with sod and say it should
Be as welcome to the soil as a city made of wood
And like the spirit of the little engine that could
If you want to do evil you're going to have to make it look good...

Well, everywhere is freedom when everyone is dead
Capital slides best upon streets are painted red
You made a people's revolution that all the people fled
You know healthy flowers don't grow in potters made of lead
The place you planted your seed is the soil where your victims bled..

Cover up the traces of your profits and it should
Mislead everyone to think they got all that they could
Now the rich are calling their community "tha hood"
If you want to do evil you're going to have to make it look good..

Fight the right war and administer the wrong one
Both are spilling blood under the very same sun
Keep invading territory 'cause you make it look fun
While you'll sick your bloodhounds on the scent of anyone
A career as a rapist and you're dressed up as a nun
No differentiation between the word and the gun...

Conniving everybody made out to be your priesthood
Think that you can like just enough that it should
Cloak your criminality as a cross made out of wood
If you want to do evil you're going to have to make it look good.

"This recording is different than the first one I released. The previous recording really didn't sound the way I felt it should, the way it sounded in my mind, so I decided to record it again. This darker-voice version is closer to what I originally had in mind". (E.H.)