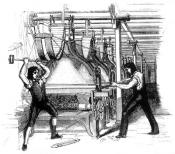 Mort au Travail / Morte al Lavoro
"Oh where are you going? said Miller to Munger
"We may not tell you." says Johnson to Judd
We're going to mills said Jack to our Jills
We're going to the factories said little Ned Ludd.

"And what will you do there?" said Miller to Munger
"Do you swear to tell no one?" said Johnson to Judd
We'll break the machinery, improve the scenery,
Meet in the greenery after, says Ludd.

"And how will you break'em?" says Miller to Munger
"Stick with us, we'll show you." said Johnson to Judd
"With pikes and with hammers, with fire and spanners,
To teach'em some manners," says General Ludd.

"'Cause 'en if we don't break'em, our lives they will take'em.
Our croft, our cottage, our village as well.
No freedom or laughter for those who come after,
But a servant and master in a factory hell."

So the door was kicked in, and the frames were all broken.
And the owner was woken and raised the alarm.
And the yeomen came riding, but we were in hiding.
The people providing, to keep us from harm.

From Notts up to Lancashire, Yorkshire to Derbyshire,
Eighteen-eleven to eighteen-thirteen
Ludd's Army enlisted and the people resisted
The march of the more-money-making-machine.

"How now shall we stop it?" says owner to ruler.
"With spies and with soldiers, the story to wait
We'll hang every breaker and Luddite we'll take'er
Transport trouble makers." And that's what they did.

Fourteen hung on a beam.
Ugliest justice that you've ever seen.
Fifty in all who took a long fall.
In the rising against the machine.

And that made a way for the age of wage slavery.
Hungered and homeless and bow to the boss
Whose factories killed 'em and crippled their children.
And all for the worship of profit and loss.

Some call it utility. They say the future will be
What the engine of progress can ...
But ... all humanity back to reality
We weave out destiny with our own hands.

All hands that are ready to hold the line steady,
To pull down the fences or pull up a crop,
And lock the laboratory, build a home in the tree top,
To the driving and never arriving stops. Stop.

And some call us vandals, and some call us hooligans.
Some call us Luddites and some rent-a-mob.
But we're standing up proud and we're shouting out loud.
For the sake of our family let's finish this job.

And when the job's done, and the long wars are over,
And we've all recovered the love in our blood.
Our ancestors voices will join our rejoicing
And sing to the memory of General Ludd.

And we'll sing to the memory of General Ludd.

And we sing to the memory of General Ludd.