First Thing I Learned About a Gun A reflection on childhood on the farm
and a response to senseless gun violence. 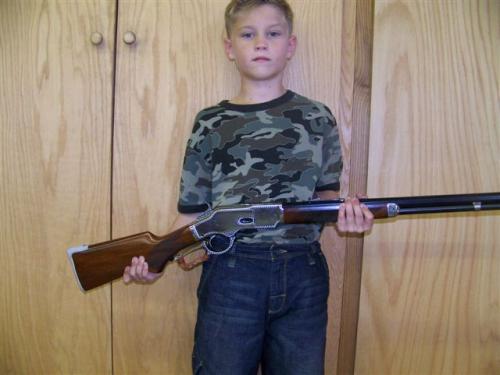 Playin' army in the barn,
Never did anybody harm
Eyes out for a sneak attack,
but those hay bales never did shoot back
Never lost a kid, not one,
'cause we were all just havin' fun
It's a long way to Viet Nam
from milking cows on a dairy farm [x2]

First thing I learned about a gun
Was never point it at anyone
Use it to get some venison
Or protect our own when the varmints come..
We kept our guns in the dining room,
12 guage, 30-30, and the 22,
O'er in the corner with the flower pot
Like pieces of furniture that we got [x2]

Pigeons up in the cupolo,
Droppins in the haymow down below
Cows don't like it on their plate,
Pretty bad taste to ruminate..
So a 10 yo with a BB gun
sent those birds to kingdom come
When you're messing with a food supply,
You know somebody's gonna die [x2]

I stalked those woodchucks through the grass –with a 22 on patrol
'cause if you don't know those mounds are there, they can make your tractor roll..

Raccoons going after our corn
ain't going to see another morn
And a coyote looking for a chicken soufflé…
Well it ain't the same as blowing away
Someone maybe a lot like me..
Just 'cause they're from another country

When we turned 18 in army green,
those hay bales suddenly got real mean
And when they started shooting back,
Everywhere was a sneak attack
I'd give anything if I could feel
that cow manure squish 'neath my heel
Feel it in between my toes
Smell it up into my nose
Just a step away to Viet Nam
from milking cows on a dairy farm [x2]

The first thing I learned about a gun
was never point it at anyone.