[2012]
Vocals by: Strife of Thought Crime Collective
Produced by: Rey Holliday
Mixed by: Jeremy Synthouse
Album: No Honor Among Kings 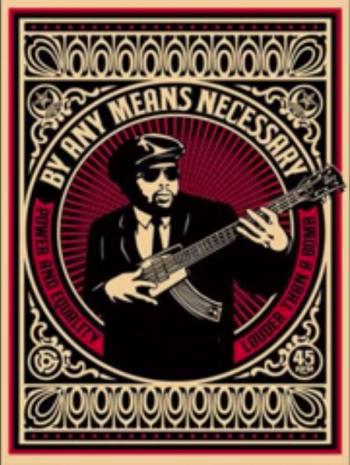 Revolution always begins first in culture, in the free expression of ideas and concepts that have the power to shake the foundation of ignorance and apathy that the powerful rely upon to maintain their rule.
That's why art, literature, film, poetry, and music are so important because they have the potential to radicalize society through subverting dominant paradigms, negating the master's narrative and offering new ways of seeing and shaping the world..

"Art of Culture War"
[Intro:]
Art's a mirror of society reflected
But also… a hammer – to shape it in the right direction

[Verse 1:]
Art's a weapon
To be reckoned with
Watch, as I explode the myths of censorship
Self-expressions a loaded Smith & Wessun
aimed at the oppressors chest
Music's a weapon to sew seeds &
build connections
to Transcend our helplessness
Culture's a weapon
To bring us together
To name our Nemesis,
Collective medicine
Against the greedy & decadent
Who gentrify everything
Homes for the wealthy
While the many sink
They got no pity
Developer vultures,
swooped down on ya city
Embezzled ya culture,
Turn towns to yuppie playgrounds
police assault ya,
Treat us like prey now
The rich are the poachers
the owners, trespassed on ya conscience,
jailed those with less cash, and walled off commons
Til ya open wallets for implanted desires
Get panhandled by advertisers,
the master's violence was implicit,
The tyrants raised the rent, we got evicted:

They demonized the different… for dividends
Still we ain't givin in…
To the state or big businesses
Cause they kissing cousins
Know the price of all things
But the value of nothing!

[Hook:]
I'll Feed the fires… of your blazing passion
Til We rise… like a phoenix from the ashes
Be inspired to Create & Imagine
A life free of slaves and masters [x2]

A life free of slaves and masters

Strife from theories to practice…
Alive with genius and madness

[Verse 2:]
This songs for the crazies, the unruly misfits,
The ones who amaze us and refuse to give in
Those who see thangs different
whose flames leaders wanna extinguish
The round pegs in square holes,
The powder kegs about to b.b.b.blow
The Fiery dynamos of this world
No dreams deferred
We can't quench our thirst
We keep the powerful on their toes
we share common foes, won't follow biased rules
Double-standards, of the status quo
Hate getting micro-managed by this cast of fools
our existence is radical that's the truth,
what the fuck do we hafta lose?
Hypocrites & their pious platitudes?
It's the rich who have violent attitudes
It's class war, a culture war, a social war
So My vocals cords act as a focused sword
slicing nooses that are choking the poor
Fear & Greed, are a Hopeless cause
Do more than consume… our fates to evolve
Create & explore… to move the human race forward

[Hook:]
I'll Feed the fires… of your blazing passion
Til We rise… like a phoenix from the ashes
Be inspired to Create & Imagine
A life free of slaves and masters [x2]

A life free of slaves and masters…