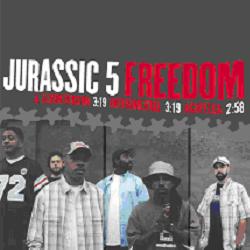 [Chali 2na]
Yo, Seldom travel by the multitude
The devil's gavel has a cup of food
My culture's screwed cause this word is misconstrued
Small countries exempt from food cause leader have different views
You choose

[Akil]
What mean the world to me is bein' free
Live and let live and just let it be (Let it be)
Love peace and harmony, one universal family
One God, one aim and one destiny

[Marc 7]
Are we there?
Imagine life without a choice at all
Given no hope without a voice at all
These be the problems that we face
I'm talkin' poverty in race
But no matter what the case we gotta...


[Soup]
Yo, I'm the first candidate to hate
Had to beat on the drum to communicate
For what was to come to those who were hung
They would decapitate the tongue if you would mention the word (Freedom)

[Chali 2na]
Got people screamin' free Umi and Jamal
But two out of three of ya'll will probably be at the mall
I'm heated wit ya'll, been defeated before
And complete an unsolved when the word freedom's involved

[Akil]
Yo, my forefathers hung in trees to be free (Rest in peace)
Got rid of slavery but still kept the penitentiary
And now freedom got a shotgun and shells wit cha name
Release the hot ones and let freedom ring

[Soup]
I'm the former vote prisoner
Hollywood visitor
Dance for cats segregated on wax
My color got me handy!
Cap Anson Andy
For the freedom they just won't hand me


[Marc 7: x2]
Hold on
Cause there's not a lot of time to
Your heart, body, soul and your mind this
They're so true and they been hurtin' so long feelin'
That's the reason why we named this song freedom