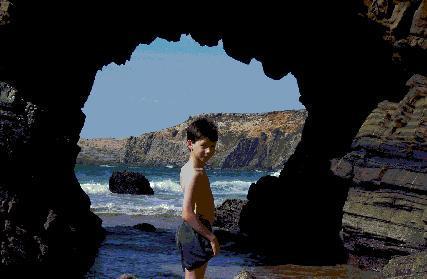 "Saw an interview of Kurt Vonnegut on the Jon Stewart show where he talked about his new book, man without a country, and how he wanted to call it the 51st state.. ..at the time I wanted to write a song called "A Man without a Country", but felt his idea was better..... summing up the Bush Administration ...as being in the state of denial.... I could only shake my head and agree.. indeed the 51st State is the state of Denial."
An annexation had gone through
Though there was nothing in the press, not a word,
Not a hint, not a clue..
A state, just the same,
Only lacking
A proper name
Save it for debate
We'll just call the place the 51st state.

Crusading pious, – pioneers
Estranged, they laid claim to terrain, a feigned frontier
The cabal playing possum got all jacked up
On Turd blossom
Growing by the golden gate
The passage to the 51st state.

Soon, – it was the in place to be
They followed down the trail -blazed by the PNAC
There was much -fanfare about trust
The blinding glare
Used to help create the trip out
The 51st state.

They create their own reality
We're an empire now friend, can't you see?
They're histories actors and you
Are left to study what they do,
And as you do, impromptu..
They act again!!


There – no child's left behind
Science and the bible are meticulously entwined
The air – is always clear skies clear
Healthy forest are abound,
And you never ever need to fear
A stooge willing to lie
Sending yours – off to die
No need to contemplate when your living in the 51st state..

They create their own reality
We're an empire now friend, can't you see..
They're histories actors and you
Are left to study what they do
and as you do, impromptu,
They act again!!


Though – he's said to be austere
The anointed one had God, God whispering in his ear
Forsake the meek and poor, go ahead,
Start your war
That's how you legislate when your living in the 51st state.

So hitch your wagon – pack your gear,
This wilderness is just a smoke screen
Blown up from fear
Tell your friends, next of kin should they ask – where you've been
You were partying too late, getting loaded in the 51st state,
51st state..