Another Bag of Bones 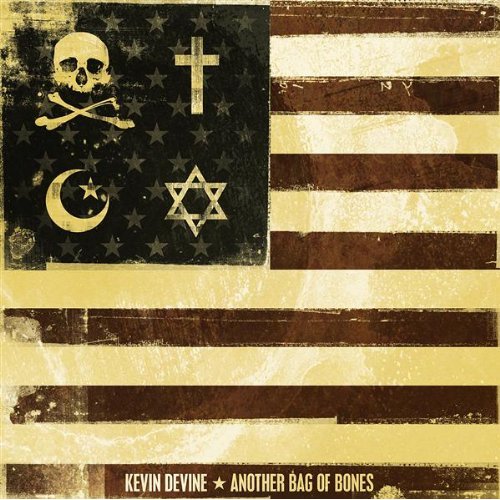 It's a brushfire spreading, feeding as it moves
It's a disappeared glacier; it's the airborne flu
It's your disbelieving eyes logging concrete miles
It's your yawning conscience and your lawyer's smile
It's an occupied country foaming at the mouth
No smoking gun, no mushroom cloud
It's a military mother with a boy in hell
And it's a flag-draped casket down an oil well
It's an Argentine school-girl gagged and bound
It's a torture camp; it's a long way down
It's the constant bracing shock of now
And it's the whole damn world turned inside out, alright
‎
It's a march to extinction with your god in step
It's his name in your mouth; it's his cross on your neck
It's a farm boy sprinting over desert dirt
And he's panting the 'Our Father' in staccato spurts
Now that's his automatic rifle and it tells no lies
It's his truth in your stomach, it's no alibi
But the trouble lies on the other side
With an equal truth prepping for his holy night
He sees the crescent and the star blink in the virgin sky
And hears the call of milk and honey from the afterlife
And as he eases to the checkpoint, he is calm and sure
It's collateral damage; it's the cost of war
It's another bag of bones for the Gods to sort
It's just another bag of bones for the Gods to sort
‎
Well it's a species disappearing, all the birds fly south
In a January heatwave, in a pulsing crowd
It's an African Militia, kids with sub-machines
It's a conflict diamond on your bride-to-be
It's the dispossessed lining up at every gate
It's the facts worth facing, faced way too late
It's the mission of modernity, go get what's yours
Til there's nothing leftover to go get no more
And it's not what we're owed, but it's what we've earned
And it's closer than we realise, and it's time now to burn
And oh it's time now to burn
And oh it's time now to burn
And oh it's time now to burn, to burn