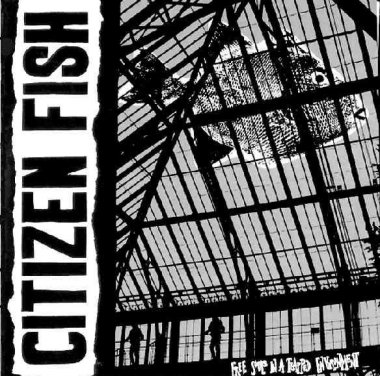 ‎(da “Ong in guerra. ‎Appunti per una critica all'umanitario”, da Guerre&Pace, n. 116 del febbraio 2005)‎
As the Charity Department at the Treasury
Dispenses licenses so you can do one too
The Ethiopians are running out of weaponry
So their leaders stock it up instead of food
And charity begins at home
So get out on the streets
And help the refugees
‎
And the manager of E.M.I. technology
Seems reluctant to discuss his business deals
Cos the weapon sales are paying for his meals
He'll go to withering heights
To keep it out of sight
‎
Profit! Weaponry doesn't feed refugees
It's a hit! McCartney's saying please on T.V.'s royalties ‎
to feed the world with guns
‎
Wembley Stadium forever on the video
And a million spent to raise that sixty more
Nothing ever quite as big as this before
And it broke our hearts
As it topped the charts
‎
But when the overkill exploited the reality
We forgot the facts and revelled in the noise
We didn't see that while we had the voice
Companies and laws were pulling vocal chords
‎
If the western world was less obsessed with property
And the need to keep it safe with threats of war
Then the third world wouldn't need a war economy
That we're supplying at a cost they can't afford
So we buy up all their crops and grain
And sell it back again
When there ain't no rain
And have a big campaign
Using famous names
And as the penny drops
Into the Oxfam box
Take off the V.A.T.
Then call it charity
‎
And the public think the government is wonderful
For promoting our assistance to the poor
But their profits are a whole lot more
They create the need to feed the refugees
And delegate the guilty feeling to the public eye
Via pictures of starvation on T.V.
And get the public conscience back out on the streets
With the empty tins
And little flags on pins
Lets call it charity
Lets call it charity
Make it pay!‎