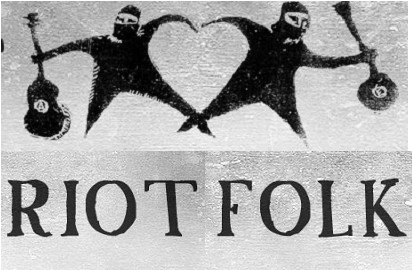 ‎Riot Folk‎
There's bombs in your buildings, America the great ‎
And you're terrified of strangers and you foster so much hate
You stormed around this planet tearing at the roots ‎
Now the chicken's are coming home to roost America
‎ ‎
Half the world is starving and they're starving cuz of debt
We say "they want an open Market, they just don't know it yet"‎
As our economic hitmen talk bullshit to the press ‎
The teenage refugees strap explosives to their chest ‎
‎ ‎
Build a wall along the border, enclose your enemies
Keep food and the water from the hands of those in need
Parade your military, fold flags for their families
Send em out into the world and watch em' burn inside their Bradleys ‎
‎ ‎
America, this your policy ‎
‎ ‎
There's a war in Northern Pakistan directed from Nevada ‎
By some Summer Soldier playing games on the computer ‎
Is he already dead? Has he been stripped of reason? ‎
Killing from afar while he's comfortably living ‎
‎ ‎
This is the country that the rest of the world sees
Ignorant, obnoxious, xenophobic, anti-peace ‎
Cul-de-Sac Conquistadors, hoarding everybody's share
With it's hands and soldiers and money everywhere ‎
‎ ‎
Saying fuck the world community, we'll go it on our own ‎
Dropping bombs on third-world countries to prove how much we've grown
But there's a generation orphans waiting in strategic places
When it all blows back it's gonna blow up in our faces ‎
‎ ‎
America, this is our destiny
‎ ‎
There's bombs in your buildings, America the great ‎
And you're so shocked and awed that people would retaliate ‎
You've run from your past but now the breeze is blowing in
If you wanna heal these wounds then it's a good to time to begin ‎
‎ ‎
America, this is real ‎