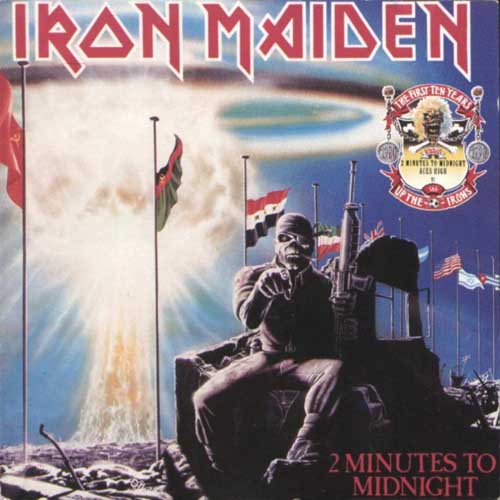 "2 Minutes to Midnight" is the tenth single released by Iron Maiden and the second track from their 1984 album Powerslave. The single was released on August 6, 1984 and rose to number 11 in the UK Singles Chart. The song was written by Adrian Smith and Bruce Dickinson.

The song has references to the Doomsday Clock, the symbolic clock used by the Bulletin of the Atomic Scientists. In September 1953 the clock reached 11:58, the closest the clock ever got to midnight. This occurred when the United States and Soviet Union tested H-bombs within nine months of one another. This song is clearly presenting an anti-war view. The first guitar solo is played by Dave Murray followed by a guitar solo played by Adrian Smith.

The opening riff of the song bears a close resemblance to fellow NWOBHM band Venom's earlier song "Welcome to Hell", Saxon's Power and the Glory and Dio's Stand Up and Shout which is featured in their debut album Holy Diver, and even more so, German band Accept's "Flash Rockin' Man" from their 1982 album Restless and Wild

The B-side is a cover of British progressive rock band Beckett's "Rainbow's Gold".

Another B-side, entitled "Mission from 'Arry", is a recording of an argument between bassist Steve Harris and drummer Nicko McBrain. The argument happened during the band's World Piece tour in 1983, and occurred following a misunderstanding on stage between the two due to technical issues with Harris' bass. Vocalist Bruce Dickinson was recording the argument with a concealed tape recorder.

The video of the song is featured on the 2003 video collection Visions of the Beast.

The song was included in Grand Theft Auto: Vice City.

United States Ambassador Ryan Crocker has a poster of the album in his office.

en.wikipedia
Kill for gain or shoot to maim
But we don’t need a reason
The golden goose is on the loose
And never out of season
Some blackened pride still burns inside
This shell of bloody treason
Here’s my gun for a barrel of fun
For the love of living death.

The blind men shout let the creatures out
We’ll show the unbelievers
The napalm screams of human flames
Of a prime time belsen feast...yeah!
As the reasons for the carnage cut their meat and lick the gravy,
We oil the jaws of the war machine and feed it with our babies.

The body bags and little rags of children torn in two
And the jellied brains of those who remain to put the finger right on you.
As the madmen play on words and make us all dance to their song,
To the tune of starving millions to make a better kind of gun.