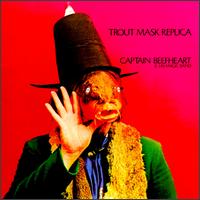 "By all means, Trout Mask Replica is a joke - or a 'mystification', if you prefer. It's not unprecedented: after all, Beefheart the joker took his cues from his good old pal Frank Zappa and certain other freaky artists. But it's probably the grandest and most flawlessly and intelligently executed mystification in music as a whole, or rock music at least: a grandiose, 79-minute project, with specially trained musicians, thought out lyrics and actually a lot of care thrown into the whole project. The most successful mystification is the one that stands the closest to the truth, isn't it? But it's still a mystification. Beefheart's lyrics are fun, but for the most part they're dadaist and sound good just for the sake of sounding good; when he goes for something a little sharper, like his thoughts on World War Two in 'Dachau Blues', he shows that he can be goofy and serious at the same time, but that's very rarely the point."
From This page
Dachau blues those poor Jews
Dachau blues those poor Jews
Down in Dachau blues, down in Dachau blues
Still cryin' 'bout the burnin' back in world war two's
One mad man six million lose
Down in Dachau blues down in Dachau blues
Dachau blues, Dachau blues those poor jews
The world can't forget that misery
'n the young ones now beggin' the old ones please
t' stop bein' madmen
'fore they have t' tell their children
'bout the burnin' back in World War Three's
War One was balls 'n powder 'n blood 'n snow
War Two rained death 'n showers 'n skeletons
Danced 'n screamin' 'n dyin' in the ovens
Cough 'n smoke 'n dyin' by the dozens
Down in Dachau blues
Down in Dachau blues
Three little children with doves on their shoulders
Their eyes rolled back in ecstasy cryin'
Please old man stop this misery
They're countin' out the devil
With two fingers on their hands
Beggin' the Lord don't let the third one land
On World War Three
On World War Three

Spoken:
"and, it attracted a lotta rats, and, uh, they close the doors, and uh,
they all got shotguns and rush out on the grass. Nothing happened, they
couldn`t get the rats to move, see. So, they got one fella down there, he said,
er, ah, heeeeeeeeee s-stammered; when he got excited he couldn`t talk at all.
They got him down there and er, Walt said, "I`ll get `em outta there,"
and he took a stick, beating them, started hitting them, tryin` to get them
outta there. Then he started shooting from all directions. And `ole Walt
thought he was gonna get killed..."