Ballad Of The Fort Hood Three 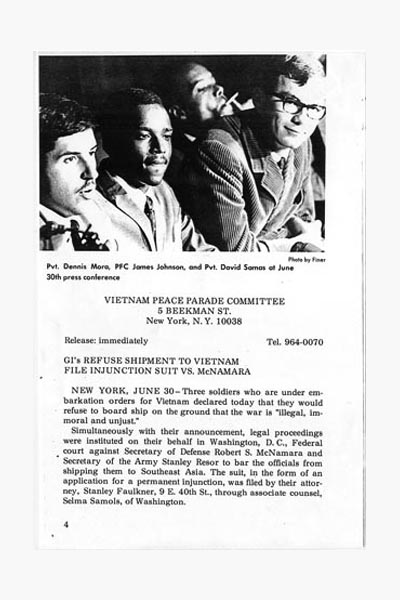 The following verses were written August 20, 1966 right after reading the direct statement of three young soldiers, who showed unusual bravery. The poetry is not as good as it should be; I hope folk process will improve it. If the choice of the melody seems not the best, some singers may want to try and find a better one.

-- P. Seeger
Come all you brave Americans and listen unto me,
If you can spare five minutes in this 20th century,
I'll sing to you a story true as you will plainly see
It's about three U.S. soldiers they call the "Fort Hood Three."

First, Pvt. Dennis Mora, he hails from New York town
A good student in Spanish Harlem, and a student a while at Brown
He cast his vote for Johnson in 1964
But let me quote his own words on the subject of this war:

"I call this a war of aggression, the whole world knows it's so;
"We're supporting a dictator who holds Hitler his hero.
"There is a war we ought to fight: it's the war on poverty,
"With jobs for all, no matter who, in this democracy."

Next, Pvt. Jimmy Johnson, he comes from Harlem, too
He wanted to be a lawyer but left college before he was through;
He had to bring his family income, worked as teller in a bank,
Now listen to his own words and tell me what you think:

"I've spent a lot of time reading and discussing Vietnam,
"The government's not been honest in telling us about Saigon
"Too long I followed blindly; I had to take a stand.
"The fight for freedom can be made right here in our own land."

Next, Pvt. David Samas, a Californian
His background, Lithuanian, also Italian
The policemen told his father something quite absurd
They'd arrange for him a discharge if he'd just retract these words:

"We've been told in training that in Vietnam we must fight
"And we may have to kill women and children, and that is quite all right;
"We say this war's illegal, immoral, and unjust;
"We're taking legal action, just the three of us.

"We'll report for duty but we won't go overseas.
"We're prepared to face court martial, but we won't fight for Ky.
"We three have talked it over, our decision now is clear,
"We will not go to Vietnam, we'll fight for freedom here."

The army tried cajolery, and later on came threats
They were taken into custody, told jail was what they'd get.
At the moment that I'm singing, the story's far from through;
The next verses in the ballad may be partly up to you.

Now if you don't believe me, you can read about it more,
About the Fort Hood Three who have refused to fight this war;
We can help them set our country straight on the right track again,
When a man can hold his head with pride and say: "I'm an American!"