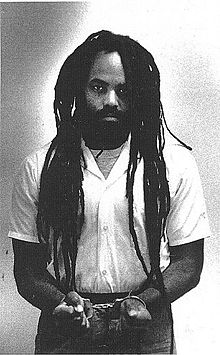 Mumia Abu-Jamal was an activist, part-time cab driver, radio personality (news commentator and broadcaster) and a renowned journalist from Philadelphia. He has been in prison since 1981 and on death row since 1983 for allegedly shooting Philadelphia police officer Daniel Faulkner.
He is known as the "Voice of the Voiceless" for his award-winning reporting on police brutality and other social and racial epidemics that plague communities of color in Philadelphia and throughout the world. Mumia has received international support over the years in his efforts to overturn his unjust conviction.
Mumia Abu-Jamal was serving as the President of the Association of Black Journalists at the time of his arrest. He was a founding member of the Philadelphia Chapter of the Black Panther Party as a teenager. Years later he began reporting professionally on radio stations such as NPR, and was the news director of Philadelphia station WHAT. Much of his journalism called attention to the blatant injustice and brutality he watched happen on a daily basis to MOVE, a revolutionary organization that works to protect all forms of life – human, animal, plant – and the Earth as a whole.

In 1981, Mumia worked as a cab driver at night to supplement his income. On December 9th he was driving his cab through the red light district of downtown Philadelphia at around 4 a.m. Mumia testifies that he let off a fare and parked near the corner of 13th and Locust Streets. Upon hearing gunshots, he turned and saw his brother, William Cook, staggering in the street. Mumia exited the cab and ran to the scene, where he was shot by a uniformed police officer and fell to the ground, fading in and out of consciousness. Within minutes, police arrived on the scene to find Officer Faulkner and Mumia shot; Faulkner died. Mumia was arrested, savagely beaten, thrown into a paddy wagon and driven to a hospital a few blocks away (suspiciously, it took over 30 minutes to arrive at the hospital). Mumia somehow survived.

The trial began in 1982 with Judge Sabo (who sent more people to death row than any other judge) presiding. Mumia wished to represent himself and have John Africa as his legal advisor, but before jury selection had finished, this right was revoked and an attorney was forcibly appointed for him. Throughout the trial, Mumia was accused of disrupting court proceedings and was not allowed to attend most of his own trial. Sabo lived up to his nickname of "Prosecutor in Robes".

The prosecution claimed that the shot which killed Faulkner came from Mumia Abu-Jamal's legally registered .38-caliber weapon, contradicting the medical examiner's report that the bullet removed from Faulkner's brain was a .44-caliber. This fact was kept from the jury. Moreover, a ballistics expert found it incredible that police at the scene failed to test Mumia's gun to see if has been recently fired, or to test his hands for powder residue. One of the most damning prosecution claims was that Mumia confessed at the hospital. However, this confession was not reported until nearly two months after December 9th, immediately after Mumia had filed a brutality suit against the police. One of the officers who claims to have heard the confession is Gary Wakshul. However, in his police report on that day he stated, "the Negro male made no comments." Dr. Coletta, the attending physician who was with Mumia the entire time, says that he never heard Mumia speak.

The star prosecution witness, a prostitute named Cynthia White, was someone no other witness reported seeing at the scene. During the trial of Billy Cook (Mumia's brother) just weeks before Mumia's trial, White gave testimony completely contradictory to what she stated at Mumia's trial. Her testimony at Billy Cook's trial placed someone at the scene who was not there when police arrived. This corroborates the other five witness accounts that someone fled the scene. In a 1997 hearing, another former prostitute, Pamela Jenkins, testified that White was acting as a police informant. Other sworn testimony revealed that witness coercion was routinely practiced by the police. In 1995, eyewitness William Singletary testified that police repeatedly tore up his initial statement--that the shooter fled the scene--until he finally signed something acceptable to them. The following year, witness Veronica Jones came forward to testify that she had been coerced into changing her initial statement that two men fled the scene. Witness Billy Cook, who was present the whole time, has stated very clearly that Mumia is absolutely innocent.

Due to police manipulation of witnesses, fabrication of evidence, and the rights of the defence severely denied, Mumia was found guilty. He was sentenced to death during the penalty phase based solely on his political beliefs. Mumia has been unjustly separated from his family for twenty-two years, with the threat of death looming over his head.

In 2001, court stenographer Terri Maurer-Carter came forward and stated that in 1982, before Mumia's trial began, she heard Judge Sabo say, "Yeah, and I'm going to help them fry the nigger." He was referring to Mumia. This backs up evidence of judicial bias and racism in Mumia's case. In the same year, esteemed Philadelphia journalist Linn Washington stated that on the morning of December 9th, 1981, he went to the scene to report on it--and no police were present. This backs up prior claims that police didn't handle the crime scene properly.

In 1999, Arnold Beverly confessed to killing Officer Faulkner. This confession is validated by a lie detector test administered by eminent polygraph expert Charles Honts. Despite concrete evidence supporting this confession, the Philadelphia District Attorney has refused to investigate, and the courts have not even allowed it to be heard. The injustice continues…

On December 18th, 2001, Judge Yohn issued a decision on the Habeas Corpus petition in Federal District Court. He upheld Mumia's unjust conviction, but challenged the sentencing phase (the death sentence). This means there could be a new sentencing hearing after all appeals are resolved, but the only options are life in prison with no possibility of parole or another death sentence. This is not justice. There is massive evidence of Mumia's innocence and he should be absolutely free. Mumia's legal team filed an appeal of this decision in January of 2002. Mumia remains on death row until all appeals by both sides are heard.

Judge Pamela Dembe's November 21, 2001, rejection of Mumia's request to reopen the PCRA hearings was appealed by Mumia's legal team. Judge Dembe based her decision almost entirely on the Peterkin case, which has just been overturned! On October 8, 2003, the Pennsylvania Supreme Court rejected the appeal, stating that the Beverly confession cannot be heard due to time limitations. The court also stated that Terri Maurer-Carter's testimony is irrelevant. The struggle continues.

A broad international movement has formed in support of Mumia. Celebrities such as Danny Glover, Ossie Davis, and Susan Sarandon, world leaders like Nelson Mandela, Danielle Mitterand (former First Lady of France), and Fidel Castro, governing bodies such as the Japanese Diet, 22 members of the British Parliament, and the European Parliament have all recognized the blatant injustice in this case and have called for a new trial at the very least. Millions of people throughout the world have taken to the streets to protest his unjust imprisonment.

Mumia's case has been a unifying point for many social struggles because it concentrates issues vitally important to our future, such as the rise in prison populations, police brutality, the death penalty, persecution of political dissent, and the continuation of white supremacy and racism in the U.S.A. From death row, Mumia has continued to speak out for all who are oppressed through his journalism. He has published four books, and his weekly columns are published throughout the world. His case is one of the most important social justice fights of our time….
It started in the darkness
of a downtown Philly street.
A cop was workin' over,
a kid was bein' beat.
A cabby drivin' by
slammed on his brakes
And walked into a nightmare,
and almost to his grave.

Mumia saw his brother
was beaten on the ground.
He tried to stop the policeman
but Mumia was shot down.
When he woke up,
he was in a hospital ward,
They told him someone shot that cop,
killed him with a .44.

Mumia was a Panther
when he was a kid,
Then he fought police brutality
as a radio journalist.
Now he's up for murder,
it's a miracle, they say,
He put a .44 bullet
through the barrel of a .38.

The system is not equal,
the system is not fair,
It's always a little fairer
if you're a millionaire.
OJ had big lawyers
to save him from disgrace.
Mumia had no money,
and so he lost his case.

Old Judge Sabo did a little dance,
As he handed down the sentence
he almost wet his pants
"Let's kill all these Mumias
and take a bite out of crime.
The streets will be much safer,
the trains will run on time!"

They killed Sacco and Vanzetti,
and murdered the Rosenbergs.
Now they have Mumia,
and it's equally absurd.
We can win a new trial,
and when he is released,
We'll lift him on our shoulders
and carry him down the street.