Le CCG delle migliaia
Sung by Arthur Johnstone from Glasgow, who used to run the city's famous Star Club, on his album 'North By North' (1989). 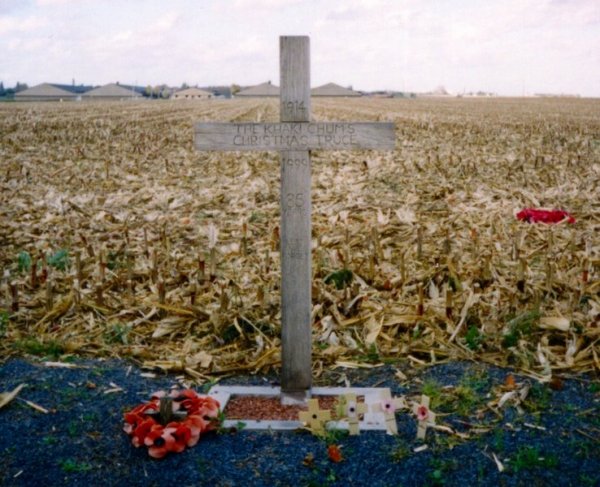 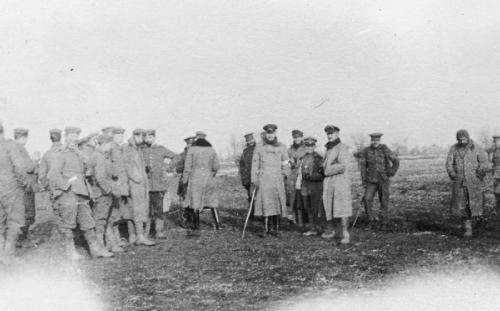 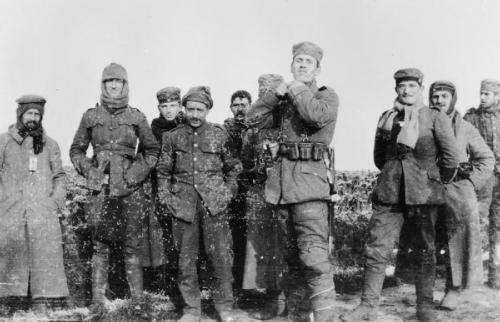 
From both sides men came running, and soon were fraternizing "in the most genuine possible manner. Every sort of souvenir was exchanged, addresses given and received." A German N.C.O. with an Iron Cross, gained "for conspicuous skill in sniping, started his fellows off on some marching tune. I set the note for the Bonnie Boys of Scotland, and so we went on and ended up with Auld Lang Syne which we all - English, Scots, Irish, Prussians and Wurttembergers - joined in." [Diary of a British Captain.]

- From some old rags and cord a makeshift football was made, and by the light of flares the two sides played a game of soccer, their previous deadly activities forgotten. (Notes Danny Doyle, '20 Years A-Growing')

At some points a "live and let live" system evolved - a means of existence involving tacit co-operation between the sides, recognizing a rough parity of forces. [...] One was to have an unspoken agreement [...] not to shell latrines nor to open fire during breakfast. Another was to make as much noise as possible before a minor raid, so that the other side could withdraw to their protected bunkers. This limitation on hostilities did not exist everywhere and was stamped on by command when it came to light. But even such informal arrangements as survived could be quickly buried, along with men killed by snipers, by the odd shell, or gas. The fraternization that did go on briefly between the lines on Christmas Day 1914 did not characterize the way the war was fought in the trenches. Violence was always below the surface, ready to explode. (J.M. Winter, The Experience of World War I, 133ff)

The incident is obviously deemed too unimportant to be mentioned in most histories of the Great War. So far this passing reference in Winter, who devotes part of his book to the experience of the front-line soldier, is the only one one can found, and I for one certainly didn't learn about it in school. However, it seems to be alive in the minds of people in Britain.


Christmas 1914 from official Mike Harding website.
Christmas Eve in 1914, stars were gleaming, gleaming bright
And all along the Western front guns were lying still and quiet
Men lay dozing in the trenches, in the cold and in the dark
As far away behind the lines a village dog began tae bark

Some lay thinking of their families, some sang songs to others quiet
Playing brag and rolling fags to pass away the Christmas night
As we watched the German trenches, something moved in no man's land
Through the dark there came a soldier carrying a white flag in his hand

Then from both sides men came running, crossing into no man's land
Through the barbed wire, mud and shell-holes, shyly stood there shaking hands
Fritz he brought cigars and brandy, Tommy brought corned beef and fags
And as they stood there quietly talking, the moon shone down on no man's land

Then Christmas Day we all played football in the mud of no man's land
Tommy brought some Christmas pudding, Fritz brought out a German band
And when they beat us at the football we shared all our grub and drink
Then Fritz showed me a tattered photo of a brown-haired girl back in Berlin

For four days after no side fired, not one shot disturbed the night
For old Fritz and Tommy Atkins, they'd both lost their will to fight
So they withdrew us from the trenches, sent us back behind the lines
They brought fresh troops to take our places and told the guns, Prepare to fire

The next night in 1914, flak was beaming, beaming bright
The orders came, Prepare offensive! Over the top we go tonight
And men stood waiting in the trenches, gazed out across our football park
As all along the Western front the Christmas guns began tae bark 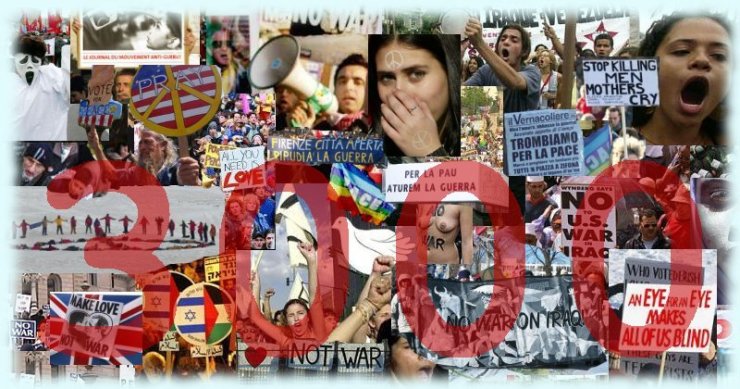 By his own admission, Felstead, who has died aged 106, was an "average" man. Born in London, he was 20 when war broke in August 1914. He had no idea what horrors the next four years would bring, nor could he have foreseen the extent to which the enterprise on which he had embarked would change, irrevocably, the world into which he had been born.

Having no particular preference as to regiment, Felstead made his choice by walking through the first door he came to inside the London recruiting office. So he found himself in the 15th (London Welsh) Battalion, Royal Welsh Fusiliers, which eventually numbered 42 battalions, mostly recruited from rural areas, and was to lose nearly 10,000 men in the conflict.

Felstead went to France in 1915, and, on Christmas Eve that year, found himself in a freezing trench near the village of Laventie in northern France.

Much has been written about Christmas Day 1914, and the unofficial truce that took place at various points along the frontline. During the course of the day, officers and men from both sides climbed out of their trenches and crossed into no-man's land to exchange greetings. The writer Henry Williamson, then serving as a private in the London Rifle Brigade, recorded that gifts were passed across as well.

Many years later, talking about his own experience of a similar truce in 1915, Felstead recalled that the sound of German soldiers singing Silent Night, barely 100 yards away, encouraged the British to respond with Good King Wenceslas. The following day, there was an impromptu kick-about with a football.

This seasonal fraternisation apparently went on for about half an hour, until brought to an abrupt end by a furious British officer, who ordered his men back to the trenches, telling them, in no uncertain terms, the brutal truth of their situation, namely that they were there "to kill the Hun, not make friends with him".

There were other spontaneous truces along the frontline, but, after 1915, they did not reoccur because, by the following Christmas, few British soldiers had the stomach for them. In the intervening period, the British army suffered its worst casualties in a single day, losing nearly 60,000 men on the opening day of the Battle of the Somme on July 1 1916.

Felstead was seriously wounded during that battle, and was eventually shipped home to England. The following year, he was posted to Salonika, from where he was eventually invalided home with a serious bout of malaria. Demobilised in 1919, he went to work as a civilian at RAF Uxbridge, later moving to a job with the General Electric Company.

In an interview two years before his death, Felstead made a telling comment which explained why the military authorities reacted so strongly against friendly contact with the enemy. Recalling the carols sung in the trenches on Christmas Eve, he said: "You couldn't hear each other sing like that without it affecting your feelings for the other side." 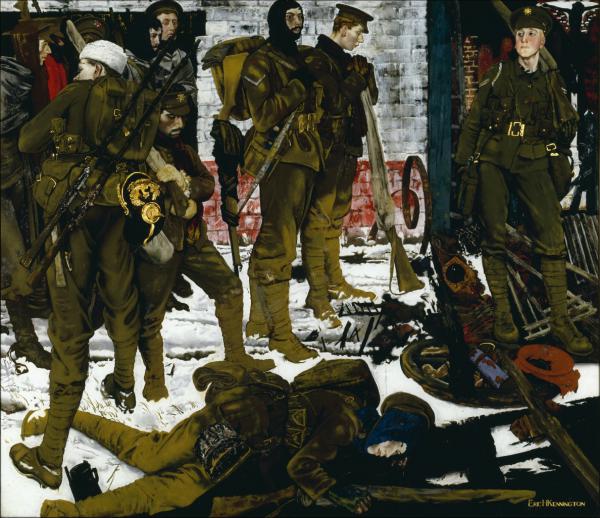 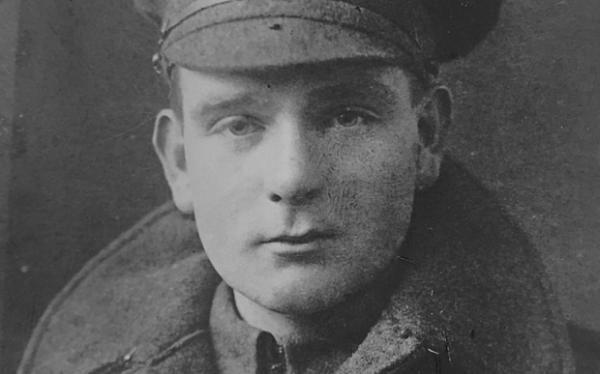 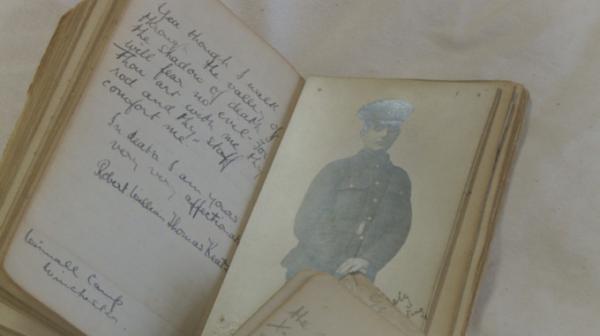