The Strange Death of John Doe 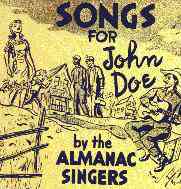 Dallo stesso disco si vedano Ballad Of October 16th, Billy Boy, C For Conscription, Liza Jane, Plow Under e Washington Breakdown.
I'll sing you a song and it's not very long.
It's about a young man who never did wrong;
Suddenly he died one day.
The reason why, no one would say.

He was tall and long and his arms were strong,
And this is the strange part of my song;
He was always well from foot to head,
And then one day they found him dead.

They found him dead so I've been told,
His eyes were closed, his heart was cold;
Only one clue to why he died -
A bayonet sticking in his side.