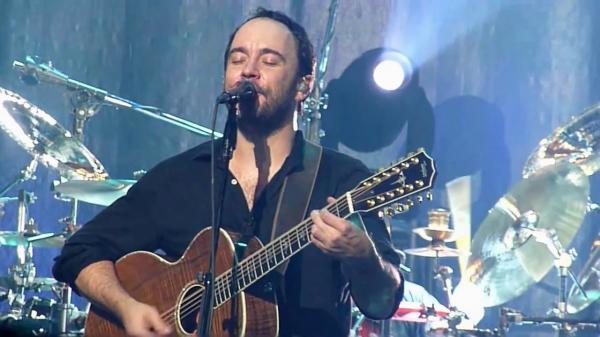 This song is about inhumanity, particularly in the context of war. The song contradicts the belief that war is necessary to eventually reach peace, as displayed in the lyrics "War, the only way to peace, well I don't fall for that." The song also talks about the way people kill others without even thinking about it, almost in a robotic fashion: "How is this hate so deep, lead us all so blindly killing killing, fools we are." The song also discusses the US government's lies concerning war and their idea of supremacy in the world: "Right is wrong now, shut up you big lie." The last topic discussed is the pain caused by war, especially towards the families of those killed: "Mother's cry is hate so deep, must a baby's bones this hungry fire feed." (thanks, Liz - Ridgewood, NJ)

This song is obviously about Jerusalem, "the last stop" on a migragtion for both Jews and Muslims. In the first stanza Dave tells us that the setting is at night and a fire is from the east. One could ponder what the east represents for a while, but since we're dealing with Jews and Muslims I believe that it is The East Bank at Gaza, a place where Islamic people live and are constantly under "fire" militaristically and idealogically from the Israeli gov't. The next two stanzas voice is dave, or a humanistic person, "fools are we, if hate's the gate to peace". Maybe he is questioning the US's backing of Israel via weapons caches. The next stanza's voice is of a Muslam who cries against the attacks,"War, the only way to peace?". He later says, "go away and dream, go away believe that we(Muslims) are the chosen ones", as Jews are often reffered to as the chosen people. Then a Jewish voice makes a rebuttal, "Oh no gracious heathen god, Blooded on the cross are sins are washed enough". Meaning that the Jews have payed their debts through persecution and deserve the "last stop". Then the Muslam again, "right is wrong now shut up the big lie". The big lie being that they(Palestinians) are getting equality? Then it repeats an earlier argument. The next line seems to be the Jewish voice towards the christian(the U.S). "we hope to break it down, so its not so black and white" a half veiled attempt at peace, followed by "its black and white" saying that maybe they can't change. Then saying, your right so righteous. an apology for killing christ. The last stanza goes back to the Islamic view, yet there is still the hope to "break it down".
- nelson, left field

I'd like to sing parts of this song to George W. Bush's face: "War. The only way to peace? Well, I don't fall for that. And you're righteous, so righteous, you're always so right. Go ahead and dream. Go ahead, believe that we are the chosen ones."
- Ash, Charleston, WV

This song is amazing, and I also wonder why it's not referenced more in regards to war. The music and lyrics are haunting. Love it!
- kelly, los angeles, CA

Dave is a very under-appreciated lyricist...I personally think he writes some of the best lyrics out there and isn't afraid to touch any topic..subtly or not
- Grey, knoxville, TN

I'm surprised that this song is not used more often in protests against war. Jo has a point, you can draw close associations with the crucifixion and this song. I believe it is a condemnation of the hypocrisy of religious leaders who use their beliefs to justify wars and killing. More people should listen to this song.
- Ben, harpers ferry, WV

True, it's a modern-day reference, but its basically the bible crucifiction story. It's easy to hear this if you listen to the lyrics closely.
- Jo, Melbourne, Australia


From "Songfacts"
yahweh yahweh, the hebrew word for god
Fire
The sun is well asleep
The moon is high above
The fire grows from the east

How is this
Hate so deep
To lead us all so blindly
Killing, killing

War
The only way to peace?
Well I dont fall for that
Raining tears
And you're righteous, so righteous
You're always so right
Go away and dream
Go away believe that we are the chosen ones
Rain tears

Oh no
Gracious even God
Blooded on the cross
Our sins are washed enough
Mothers cry
"Is hate so deep?
Must my baby's bones
This hungry fire feed?"
Smoke low rolling
Symphony of death,
This is the last stop
Raining tears

Always glorious
And hope that we can break it down
So it's not so black and white
It's black and white
This is the last stop
And youre righteous, so righteous
You're always so right
We're nailing god to a tree
And we say "forgive me"

Go away and dream
Go away believe that
We are the chosen ones
Rain tears
This is the last stop
I hope that we can break it down
So it's not so black and white.