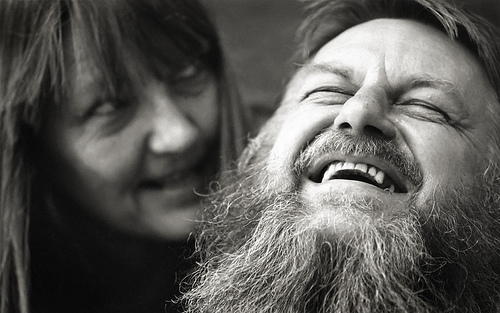 Robert Wyatt may not have won the Mercury Music Prize - in truth he did not expect to - but the biggest cheers at the ceremony were undoubtedly reserved for him.

Yesterday the British musician, acclaimed for his powerful, politically charged but wry songs, told how one of the stand-out tracks on his celebrated new album was inspired by an article in the Guardian about a boy born as the bombs began to fall at the start of the first Gulf war.

Wyatt's wife and writing partner, Alfreda (Alfie) Benge, wrote the lyrics for Lullaby to Hamza after being moved by the story of Hamza al-Gahnem, who spent the first 40 days of his life being nursed in an underground shelter.

Perhaps best known for the anti-Falklands-war song Shipbuilding, Wyatt had been casting around for extra material for his album, Cuckooland. Shortly before the war in Iraq began in March last year Wyatt and Benge were at home in Lincolnshire and he played a slow, mournful tune. "It was a tune I'd had for a while but hadn't known what to do with it. I'd tucked it away. I played it to Alfie and asked her if she could do anything with it. Benge said she immediately heard the word 'lullaby' in the tune."

The pair headed to the London studio where Wyatt, a former member of the 60s band Soft Machine, was to record his first album since 1997.

Benge said: "It was terribly difficult to concentrate on, when this war was about to happen. It clouded everything." Both Wyatt and Benge followed the build-up to war closely. It was then that Benge found the story which she realised could inspire the lyrics for Wyatt's tune.

Benge said: "I was reading the Guardian every day and I was particularly struck by a piece by Suzanne Goldenberg." The article tells the story of Hamza al-Gahnem, who was 12 at the beginning of last year's conflict. He was born on January 17 1991, when US bombers blasted Baghdad at the start of the first Gulf war.

Benge said she was affected by the vivid description of the boy's birth.

The boy's mother, Wisal, felt the first labour pains when the missiles struck. As soon as Hamza was born hospital staff left her and dashed down into a bomb shelter, not even stopping long enough to cut the umbilical cord. Ms Gahnem told Goldenberg: "There was no electricity, the heating had stopped, the windows were broken, it was very cold, and he was naked. I thought the bombs were falling directly on top of us."

She was convinced that her son's earliest experiences had made him quieter and more serious as a child. The boy had told Goldenberg that he did not believe there would be a second war. "I do think about the war. But I don't think there is going to be one. It is just a rumour," he said.

Of America he said: "They want our land and our oil. They have a lot of cars and petrol is very expensive."

In Lullaby for Hamza Benge wrote: "When bombers bomb again, I need your lullaby. Fires are burning, the nightmare's begun."

Benge was born in 1940, and though she could not recall the bombs of the second world war she had had nightmares about the conflict for many years. "I thought about these children in Iraq having the same nightmares. I have no children of my own so the Iraqi children seemed the perfect people to have a lullaby for."

Benge said that she did not mean the song to be overtly political. "But it's difficult to avoid it," she added. On the day Wyatt and Benge got home from London, despite Hamza's optmistim, the war began.

The critics have lavished praise on Cuckooland, some singling out Lullaby for Hamza for particular praise. One critic described the song's lyrics as "heartbreaking" and said that Wyatt's voice was a "direct emotional conduit". But, typically, the modest singer plays down his role in the song. "I just tried to get the music right," he said.

However, he adds that, living in Lincolnshire, it was hard to forget the bombers. "This is bomber country. They practise here. For us it's not just an abstract issue."
When bombers bomb again,
I need your lullaby.
Fires are burning,
The nightmare's begun.

The world is dark again,
I need your lullaby.
Sleep has gone.
Night is long again.
sing me your song.
Let me sleep.
Bring me peace.

When bombers bomb again,
we'll need your lullaby.
Children cry.
Houses burn again.
Once more.
Sing songs to soothe them,
to dry their tears,
to drown the screams of war.

The world's gone wrong again,
I need your lullaby.
Night is long.
and sleep's just a dream.
Sing your song.
stay close to me.
Sing to me.
Hushabye.

The world is dark again,
I need your lullaby.
Sleep has gone.
night is much too long again.
Sing me your song.
Let me sleep.
Bring me peace.