>>> PS: reading this song only made me cheer for the Iraqi who built... 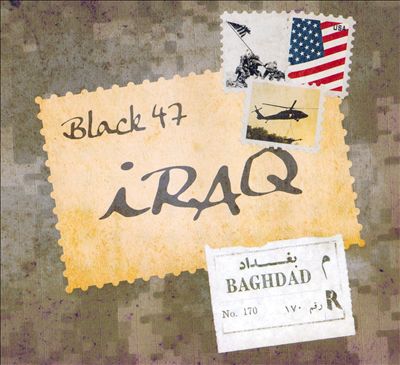 "Johnnie was just a kid. I mean we were all kids but he seemed younger, less sure of himself. Anbar changed that. Grow up or die. It only took one mistake but Johnnie didn't make any. That's what I liked about him. Guy had eyes in the back of his head. I guess his luck ran out. It was the longest hour of my life. Waiting for that chopper. Begging him to hold on. I still remember the last thing I said to him, “when we get back to Bragg, I'm gonna drink your ass under the table.” Yeah…" (Larry Kirwan from Black 47)
The river gleams at night, stars shiver and sigh
A tracer rips the ceiling out of the sky
Johnnie is hurt, his blood soakin’ the dirt
Hey Medic man, don’t let my only friend die
‘Cause we’ve been through good and bad
From Ramadi to Baghdad
Johnnie had my back like it was his own
In the heat and the dust, the sweat and the rust
Nothin’ was ever gonna stop the both of us goin’ home

So hoist up the Stars and Stripes, gonna break out tonight
Johnnie, hold on, man, whatever you do don’t let go
Hey, President Bush, what are you doin’ to us
We’ve been through hell, man, it’s time we went home

The captain he yelled out, “sniper in that house”
Then the RPG blew him to blue blazes
Johnnie, hold on, chopper be here at dawn
Just one more hour, babe, then you and me goin’ home
The Hummer took the bend at forty plus and then
The IED cut the door and the driver to pieces
Nothin’ to do but squeeze a picture of you
And pray to god you’re still waitin’ when I get home

So hoist up the Stars and Stripes, gonna break out tonight
Johnnie, hold on, man, whatever you do don’t let go
Hey, President Bush, what are you doin’ to us
Johnnie on fire, man, that kid just wanta go home
The stars have disappeared, I can smell the fear
I’ll hear those AK-47s forever
Johnnie don’t cry, we’re gonna make it home I swear it, guy,
Just gotta hold on, man, the sun soon be dawnin’
The corporal he got hit, fell into a ditch
Hold his head up, man, don’t let him sink under
Then a thunderin’ breeze split the skeleton trees
Sweet hum of that chopper, last sound I remember

So hoist up the Stars and Stripes, gonna break out tonight
Johnnie, hold on, man, whatever you do don’t let go
Hey President Bush, looks like you missed the bus
Johnnie’s in heaven, man, better take that kid home

I have always been a fan of Black 47, but I honestly do not think any songs from the album IRAQ belong on your site because THOSE ARE NOT ANTI-WAR SONGS AT ALL. They are smarmy, pandering love-letters to the American aggressors and invaders of Iraq, expressing zero sympathy for, or even a basic understanding of, the culture destroyed in that genocide--And YES, it was a GENOCIDE against Iraq. This entire album is a nauseating glorification of the invaders as "victims", IT IS DISGUSTING THAT YOU WOULD FEATURE IT ON YOUR SITE AT ALL. It is disgusting that Kirwan, having witnessed the occupation of his own homeland of Ireland, was incapable of showing any empathy or understanding toward the Iraqi victims of American occupation in his songwriting.

Kirwan has ONE true anti-war song, I'M NOT MARCHIN' ANYMORE, and even that barely qualifies because it is still written with full sympathy for the invading aggressor & almost none toward actual war victims. I used to love Kirwan's songwriting but with the album Iraq he only proved he is an obtuse idiot who has very little understanding of war from any viewpoint other than that of sympathy for the invader. You should remove the album IRAQ from your site because it is frankly much closer to glorifying war than condemning it.

PS: reading this song only made me cheer for the Iraqi who built the IED that blew Johnny's ass to bits. FUCK JOHNNY.