I Dreamed I Saw Anne Feeney 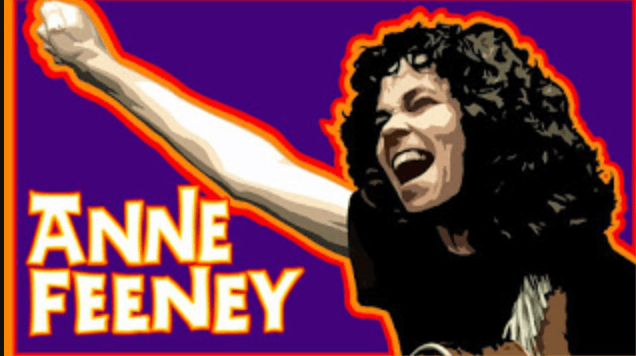 An old friend of mine and Anne's suggested I do another rewrite of Earl Robeson's song about Joe Hill. I began with carrying out Robert's songwriting assignment, but then it turned into this. I miss you, Anne.

Have You Been To Jail For Justice ? 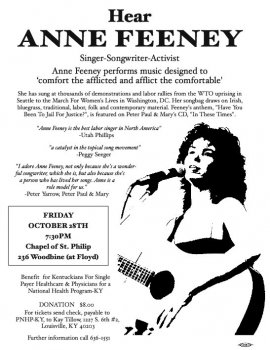 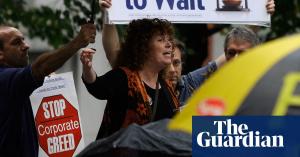 We Just Come to Work Here, We Don’t Come to Die 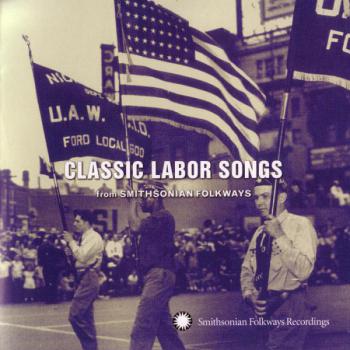 A Song for Santiago Cruz

[2007]
Lyrics & Music by Anne Feeney
Album: Dump The Bosses Off Your Back

We learned of FLOC organizer Santiago Cruz’s murder while studying migrant workers’ strategies at the Regina Polk Leadership Institute for Labor Union Women, held annually in Chicago with the inspiration of Helena Harlow Worthen. I wrote this song at the Institute.
On April 9th they found him - He'd been beaten, bound and gagged
(continua)
inviata da giorgio 6/2/2010 - 09:12
Dal sito della CUB 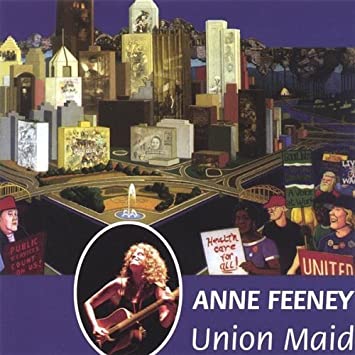 Here's a jug band/swing ode to 'the lowest life form found in nature's lab' - strikebreakers or Scabs!
"I wrote this song for Solidarity Day '91... I was inspired by a New York Daily News striking reporter. In a curious turn of events he ended up inside the building at 3 AM during the height of the strike. He talked about what it was like to see pictures of someone else's kids on the desk he worked at for 22 years. He said it was like "Invasion of the Body Snatchers" – that only pod people could come in and do what these scabs were doing".
There's an alien life form been creepin' round my job site
(continua)
inviata da giorgio 22/5/2010 - 14:56 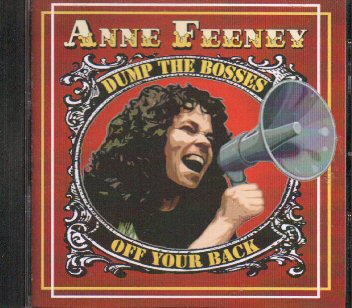 "...Well, better we'd do it.. the Judgment Day...
I wrote this blues during a workshop at the U.S. Labor Against the War conference in Cleveland. It's been a part of the play "Buried: The Story of the Sago Mine Disaster" ever since..
Last night as I lay tossing and a-turning in my bed I dreamed
(continua)
inviata da giorgio 15/4/2010 - 13:05

Dump The Bosses Off Your Back

We Just Come to Work Here 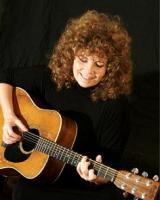 "Oregon" longshoreman Harry Stamper wrote this song after his boss asked him to put his life at risk one day on the docks. "Why don't you get in there?" shouted Harry's boss. "Why don't you just lay down in the driveway and lick your balls?" replied Harry. Thanks to the Occupational Safety and Health Act, Harry was able to appeal his firing and get his job back. It was determined that Harry would have been killed if he had listened to his boss.
Working at this job is dirty and dangerous And I'm taking risks anyway.
(continua)
inviata da giorgio 7/2/2010 - 09:04 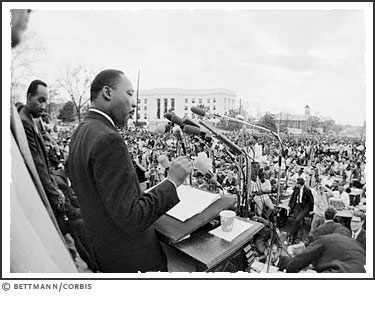 Lyrics based on a speech by Rev. Dr. Martin Luther King on March 25, 1965
Music by Anne Feeney
Album: Dump the Bosses Off Your Back
I know you ask today, How long will it take?
(continua)
inviata da giorgio 6/1/2010 - 12:32
Percorsi: Martin Luther King

War On the Workers 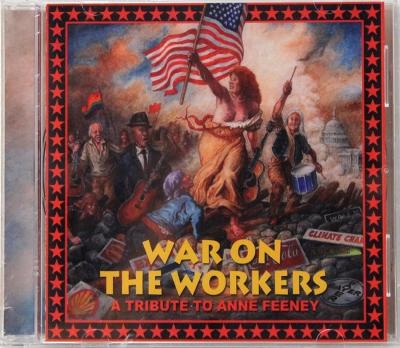 This song was featured on Bill Moyers and is the theme of the Justice at Walmart campaign. I wrote it during the Staley Strike in Decatur, IL in the early 90s. This recording features Jon Fromer, Janet Stecher and Susan Lewis on backup vocals and Charlie Chadwick on bass, Sam Bacco on percussion, and me and Mike McAdam on guitars. The two people named in the song died .... Jim Beals when he was ordered into a tank filled with poison gas, and Karen Silkwood when she tried to expose dangerous practices at her place of employment, Kerr-Magee.
Listen up – We've got a war zone here today
(continua)
inviata da giorgio 6/1/2010 - 10:29
Percorsi: La guerra del lavoro: emigrazione, immigrazione, sfruttamento, schiavitù 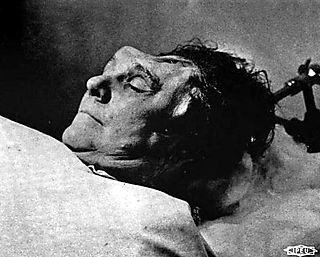 Fannie Sellins, a union organizer known as the “Angel of Mercy”: gave her freedom and life defending free speech, demanding the right to organize, and helping the poor struggling mining and steel families of Western Pennsylvania and West Virginia. Due to brutally long work days 7 days a week, low pay, and dangerous unhealthy working conditions, there was much worker unrest in the mining and steel industries at the time of the First World War. With 12 hour days workers had little time or energy for family, education, recreation, or religion. The mining and steel companies with near total control of the police, courts, and newspapers crushed efforts of workers to unionize and fight for better working conditions. Free speech and public meetings were banned in the cities and towns surrounding Pittsburgh. Workers were fired for... (continua)
In labor's glorious history was many a union maid
(continua)
inviata da giorgio 6/1/2010 - 08:24
Percorsi: La guerra del lavoro: emigrazione, immigrazione, sfruttamento, schiavitù

How Much For The Life Of A Miner ?