A Better World For You 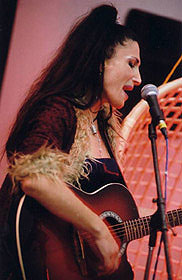 Many thanks to Anthea Sidiropoulos for permission to add this song to the "Antiwar Songs" collection.


Anthea writes:
"My Dad was 'Theo Sidiropoulos' first Greek migrant (or any migrant of non-anglo-saxon origin I think) to become, firstly a Mayor (of Collingwood) and a year later Member of the Legislative Assembly of the Victorian Parliament. He was a left-ist labour, trade unionist and a greenie..

The song literally is a chronology of his achievements. However behind all his actions was a statement he always said to me and that was 'I'm doing it for you my girl.. for children just like you..' in creating a 'better' world ie: peace, love and understanding to all living beings regardless of race, colour, sex, class, social or financial status etc etc etc...

The song came about when I, like many other songwriters earlier this year were busy writing what we feeling in our hearts about this senseless war.

When I sat to write... I suddenly felt an unexpected overwhelming anger... stemming from a reality that *I* had to actually sit and write such a song AGAIN and that events such as these were actually
happening... AGAIN!!

My upbringing was filled with stuffing envelopes, making placards, sending out pamphlets, making signs... all in the name of 'peace'... As far as I can remember... it was something in 1963 - when I was 3 years old (ok now you know my age) - when my dad put me on his shoulder and I consciously heard and learned about the word 'PEACE'...

My present anger stemmed from the feeling of...."have all their efforts gone in vain?... why should I write yet another damn peace song... how many roads did Bob Dylan travel to write so many, as did so many others who wrote not for the sake of writing a song, but being true expressionists of troubled times of their era, through music.. writing from their heart and soul.

So, I thought, had all my Mum and Dad's and our friends and relatives efforts gone in vain? Why are we having ANOTHER WAR!!???? WHY DO I HAVE TO WRITE ANOTHER BLOODY PEACE SONG?!! WHY DOES ANYONE HAVE TO??? When all was said and done years ago when I was growing up... everyone
working so hard - days, evening, weekends, nights... (what social life??)

Then the anger subsided and the words flowed... I had to write the chronology to show the actions taken to achieve what *they* ~ everyone in *that* era - believed in.. because they took to the streets, because they stood against governments agenda.. because they stood up to what they believed was right... and where was their fear? - engulfed in their passion and spirit for a better world for their children."
I was only three years old when my Daddy put me on his shoulder -
Held my fist up high with his, To defend the rights for Peace
Then came marches of the Vietnam War, Gough Whitlam gave a mighty roar
He opened up the doors for SBS, TripleJ, and Medicare!
(and) I turned Seventeen, when Dad made history and took his place amongst the
anglo-saxon mayoral robes of good old Collingwood,
(And in) '78 a year ahead, in Parliament house he stood
and gave his maiden speech in Greek to show his accent had real meaning

(He was) arrested up in Brisbane with George Georges State MP
they stood against the Governments (Bejelke Peterson's agenda) agenda banning Civil Liberties,
The right to march The right to meet The right to hold hands in the street
They raised their voices carried by the wind… (and I can hear them saying)
Close the freeways, plant the trees, give gays and women back their dignity!
As for all the Aborigines? There's just one word ... and that's "sorry"

Ten years on he said Goodbye with fist still help up to the sky
I proudly gave a wave Goodbye in Kennetts town - one must ask why,
He didn't leave me crowns and pearls, houses, cars or a swimming pool
His Passion and Spirit were his legacy

And so it goes in 2003 - he's marching again from where ever he is
He says My Girl, you gotta do what you can Traits of human kindness and dignity,
Respect & Understanding for my fellow man