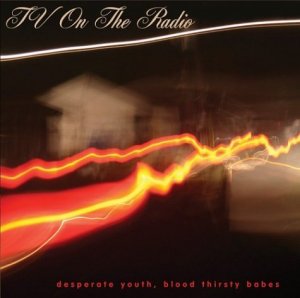 Allmusic says that "Bomb Yourself" is an "antiwar meditation," but I've looked hard for the last hour and I can't find it.

Oh, I'm sure TVotR think war is bad, and I'm sure they're the good guys, but as you grab the words away from the otherworldy harmonies, separate them from the spacy swirl of electronics, all you find is a hint of apocalypse.

Not like the apocalypse you might find in a Metallica song, brought on by Chthulhu or some scimitar-clutching warrior. No, keeping in mind that TV On the Radio were formed in the short aftermath of 9/11, the apocalypse they touch upon is the same one we all worry about, the kinds that New York and Bali and Madrid have seen a share of.

As Dan Aykroyd might say, it's real wrath-of-God type stuff:

No fucking around, the beginning of the end times is what that sounds like to me.

TVotR aren't even necessarily taking sides in this final dark fantasy. When they tell us that

TV dinner
has overfed your fears

they're certainly not talking about the mujahdeen. It's about us, how we've abridged our own liberties, how we've burned ourselves fighting fire with fire. But unless I miss my mark, the family that's being made and then killed dead is in the Middle East, and the TV is tuned to Al Jazeera.

Fact is, there are folks fixin' for a battle. Not just Al Qaeda and the rest of the Global Jihad on the other end, but also the evangelical right and the PNAC, back here under the flag, and looking out--as TV on the Radio does--over New York Harbor.

I realize that's controversial interpretation, an interpretation that even Mssrs. Adebimpe, Malone and Sitek might themselves take issue with. Blender said the song was about the Iraq War, and we can all get safely behind that, right? We're all against the freaking war. But is it that outrageous for a band born under the cloud of windborne debris left by the Towers to be a little bit nervous as they look around?

I think not, though you're free to differ. But at least if the words might make one nervous, the sounds can still chill you down.

You've made a family
Now kill 'em dead
Oh it's not me, ma
It's what the TV said