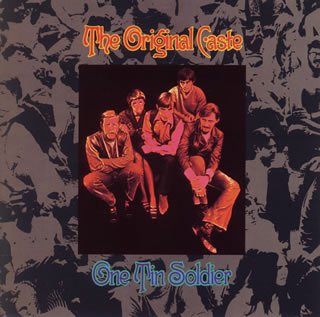 La copertina originale dell'incisione di The Original Caste. The Original Caste's original disc cover.
This song's message is that human greed and violence is futile.
The songwriting team of Dennis Lambert and Brian Potter wrote this. They wrote songs for Dusty Springfield, The Four Tops and Glen Campbell.
In 1969, this was a hit for a short-lived Canadian band called Original Caste as simply "One Tin Soldier." Original Caste's version reached US #34 and went to #1 in Canada.
Coven's version was used as the theme from the 1971 independent film Billy Jack.
In 1973, Coven released a re-recorded version of the song which reached US #79. In 1974, their version from 1971 was reissued, reaching US #73.

The song was written during the anti-war movement of the late 60's. Also going on at that time was the Six Day War of 1967 in Israel. The "Kingdom on a mountain" is none other than The Temple Mount in Jerusalem. It sits on Mt. Moriah. The people of the valley are the Muslim or Palestinian people who live in the Kidron Valley adjacent to Mt. Moriah. The Stone with the treasure underneath it is the stone that the Muslims claim Mohammed ascended and the Jews claim was the base in The Holy of Holies. The treasure underneath "the stone" which is up to 120ft.under the Temple mount is where the supposed hidden treasure of the Jewish treasury was. The Templars of the early 1000 a.d. where said to have found this treasure. The song closely discusses details of "The Crusades". The people of the Valley who did not want to share was none other than the leader of the Muslims, Saladin the Turkish leader who had restricted visitation of other religions to Jerusalem which in turn intitiated the crusades. Saladin(the Muslims) did regain the Temple Mount. So, the song's message is that we fight wars and shed blood for greed in the name of our God's but God just want's "Peace on Earth" as was written on the stone when it was turned over. The One Tin Soldier riding away just says that masses die in war on both sides and only one or a few are left. It sarcastically says go ahead and do evil but you will not escape your deeds on Judgment Day.

The song has been covered by other groups, including Gimp, Me First and the Gimme Gimmes, and Killdozer. Luanne Platter (Brittany Murphey) sang the song on the King of the Hill Soundtrack. It has also been mistakenly credited to Joan Baez, who never recorded it.

This song was also covered by Voices for Peace, a band consisting of a group of voice actors including Greg Ayres and Tiffany Grant. Ayres sang this very rock-ish version of the song.

The Original Caste version is still played on Canadian oldies stations. (en.wikipedia)
Listen, children, to a story that was written long ago
'Bout a kingdom on the mountain and the valley folk below.
On the mountain was a treasure buried deep beneath a stone,
And the valley people swore they'd have it for their very own.

Go ahead and hate your neighbor, go ahead and cheat a friend.
Do it in the name of heaven, you can justify it in the end.
There won't be any trumpets blowin' come the judgment day
On the bloody morning after one tin soldier rides away.

So the people of the valley sent a message up the hill,
Asking for the buried treasure, tons of gold for which they'd kill.
Came an answer from the kingdom, "With our brothers we will share,
All the secrets of the mountain, all the riches buried there."

Now the valley rose in anger, "Mount your horses, draw your swords,"
And they killed the mountain people, so they won their just reward.
Now they stood beside the treasure on the mountain, dark and red,
Turned the stone and looked beneath it, "Peace on earth," was all it said.