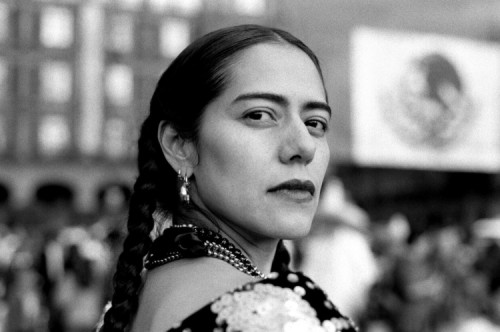 "Sale Sobrando" also vocalizes a counterculture to modernity. Dense with messages, tropes of mexicanismos, cultural and national symbols, Downs critiques multiple contradictions and forms of oppression as well as repression. Lila Downs' aesthetic performance evokes emotion through song and is important to consider. She alters the sound of her voice at critical points and vocalizes nonverbal sounds to convey her message. As a result, her musical performance becomes another opaque vehicle participating in the politics of transfiguration. Downs conflates power relations, especially those inherent in modernity, with progress, transnational relations, and the contradictions within Mexican national identity and demands their critical attention.

The song begins with the Mexican foundation narrative "Los hombres barbados Vinieron por barco Y todos dijeron "mi Dios ha llegado."" Disputing the "discovery" of Ameríca, the song documents the encounter between the indigenous population and Spanish explorers in which the Spanish explorers were "welcomed" into Mexico. Beginning with these images, the first lines of the song bear a striking parallel to Gabino Palomares' song "Maldicíon de Malinche" which also deals with similar themes, but does so in a way that continues a masculinist legacy that blames Mexico's problem and crisis of identity on Malinche's legacy. Downs, however, takes a different approach to Mexico's identity "crisis." She directly aims her critique on modernization and modernity's homogenization of national identities. Specifically Downs' critique revisits the notions of the Mexican intellectual elite, who shortly after the Mexican Revolution began to conceptualize the Mestizo as the embodiment of a universal cosmic race that fused all races in Mexico into the Mexicano. They maintained that the Mestizo represented natural progression and the future of mankind. Mexican nationalism forged its national identity "myth" through the concept of mestizaje. Downs' desire to expose the contradictions of Mexican nationalism becomes further evident in the line: "Mexicanos al grito de guerra," the first line of the Mexican national hymn.

Although to some, violence directed toward native populations in Mexico and the violence inflicted on immigrants in the US seem like separate issues, Downs brings them together. She links them through the intricate web of exploitation inherent in modernity, progress, and transnational global capitalism. "Sale Sobrando" juxtaposes a series of commentaries, some which document actual events. The lines "En Chiapas mujeres y niños rezan/ machetes y balas con sangre bañar" evoke the Actéal, Chiapas murders of December 22, 1997. With many in church sanctuary, 45 Tzotziles people were killed — 21 of them women and 14 children; 25 more were injured and 5 were "disappeared." When Downs sings, "La migra y el border patrol/te agarran, y luego te dan su bendicíon," she highlights the United States' contradictory immigrant policy and its connection to an economy based on the exploitation of workers who cross the borders, are not welcomed, yet endure violent repression. "Bendicíon" has a double meaning; it is a physical act of blessing, but in this case it sarcastically refers to the beatings utilized by the border patrol. Downs use of "bendicíon" also bears witness and evokes historically violent forms of religious conversion, the complicity of religious institutions' non-intervention on the behalf of social justice, and, finally, critiques the way in which the perpetrators of violence are absolved of their crimes. After all, aren't they the guardians of the border, above all laws, sins, and trespasses? Through these examples, "Sale Sobrando" addresses how inequalities, produced through structures of power, resurface in other contact zones. In other words, Downs articulates how communal identities, as well as unequal power relations, are also (inter)national.

Countering what some perceive as stable mixed Mexican identities, Downs' experiences and examples present images that deconstruct the stability of this image. She reveals the problematic ways in which mestizaje simplistically seeks to eliminate traces of difference. While everyone: Indian, black, white, and mestizo form the Mexican nation, not everyone is an equal part of it. She conveys this internalized rejection of difference in her lyrics: "cuando mires no te va gustar, tu cara es morena y quieres ser guera y bien que te comes tu taco y memela," These lyrics dramatize what Inés Hernández-Ávila calls the "internalized racism of Indian hating that frames the mestiza consciousness and manifests itself with a shame and rage at being Indian," a situation Downs has had to personally overcome. The sarcastic mocking laugh that follows these lyrics serves to emphasize the ironic contradictions between the idealized concept of mestizaje and the unequal reality. Although mestizaje is seen as a way to fracture or fuse binaries, "Sale Sobrando" does not applaud mestizaje. Rather, it challenges the concept of mestizaje. In a firm tone, Downs scolds the mestizo who is made to answer to his complicity in this process of homogenizing erasures. "Mestizo haz de ser por tus vicios" is followed by a painful wail. These nonverbal sounds are strategically placed in the text to amplify her critique and message.

"Sale Sobrando" closes with calling into question notions of justice. While tourists and foreigners, privileged in easily crossing the border, are able to go to Mexico, she sees their efforts as in vain. "What do they worry for — human rights?" Downs asks. She responds, "Justice here is good for nothing." Justice, as she has sung, only applies to certain individuals who conform to the nationalist rhetoric of mestizaje.

The bearded men came on boats
and everyone said, “the gods have come”
now the ‘wetbacks’ go up north
but nobody says, “welcome brothers”

If the dollar calls us the “raza” keeps goin’
if the ‘gringo’ asks for it, it suits the ‘paisa’
the narcs, and the border patrol catch you,
and then give you their blessing

In Chiapas, women and children were praying
machetes and gunshots stained
the fatherland, has claimed it’s blood from progress
but those people, who’ve been sacrificed are your same race.

The indian, the black, the ‘mestizo’, the whiteish one.
They all march to ‘beautiful Mexico’
but where did justice and shame go?
If bloodbaths go to limbo

The blood that runs from sacrifices,
it had to be youand your habits, ‘mestizo’
Don’t go too far and look in the mirror
because when you look you won’t like what you see
Your face is dark, but you want to be white,
but you really like your tacos and tortillas

Ay yay ya yay, sing and don’t cry
because hearts are contented,
beautiful Mexico, by singing

We sing, Mexicans, to the call of war
but we’re not crazy enough
to go to the mountains
tourists and foreigners come here in vain
what do they worry for – human rights?
if justice here is good for nothing