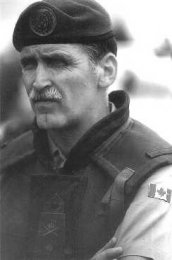 General Romeo Dallaire was the head of the UN Peace Keeping Mission in Rwanda. Shamelessly abandoned by his own organization, Dallaire performed near miracles with his rag tag group of mostly unarmed peace keepers...saving countless lives by the sheer force of his will. He did so, however, at great personal cost. After the Genocide he went home to Canada a broken man...suicidal from the horrors he'd seen. His first person account of his time in Rwanda, Shake Hands with the Devil, is a horrifying tale of being inside the vortex...knowing what was about to happen.....but being unable to stop it due to the moral cowardice of the West.

He has slowly pieced his life back together, writing and speaking of Rwanda all over the world. Free from the bounds of military restraint (he retired due to his illness), he is not shy about placing some of the blame where it belongs....that is, on those who consider black Africans somehow less deserving of life than white Europeans.

The West had few heroes in Rwanda during the Genocide. Here is one of them.
When I lay down I can hear the guns
the grenades and the screams
but the weariness will wear them down
and all that's left is what I dream
my wife will try to hold me
when I'm shaking in the night
and she knows damn well I'm lying
when I tell her I'm alright

I could stack all of the bodies
along the side of the UN
and they'd cover all the windows
where you pledged "never again"
Rwanda's heart is broken
and my soul is cut in two
one side still the peacemaker
what will the other do?