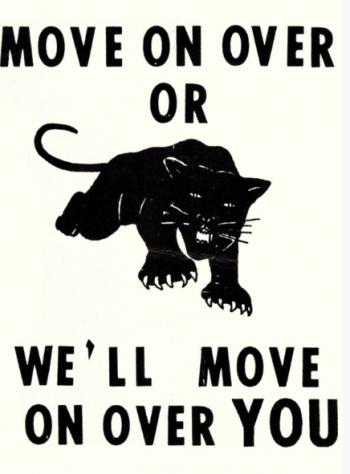 
According to 'Everybody Says Freedom: A History of the Civil Rights Movement in Songs and Pictures' by Pete Seeger this was created by Len Chandler for a 1965 commemoration in NYC of the failed raid on the military arsenal Harpers Ferry in 1859. The song mentions leader of the attack John Brown, who picked up arms in order to defend fugitive slaves. He was arrested, convicted of treason and hanged.
comment by Protest Songs on youtube
Mine eyes have seen injustice in each city, town and state
Your jails are filled with black men and your courts are white with hate
And with every bid for freedom someone whispers to us: wait
But the movement’s moving on.

Chorus: Move on over or we’ll move on over you (3x)
O the movement’s moving on

It is you who are subversive, you’re the killers of the dream
In a savage world of bandits it is you who are extreme.
And you never take your earmuffs off nor listen when we scream
O the movement’s moving on.

Your dove of peace with bloody beak sinks talons in a child
You bend the olive branch to make a bow, then with a smile
You string it with the lynch rope you’ve been hiding all the while
But the movement’s moving on

You conspire to keep us silent in the field and in the slum
You promise us the vote then sing us “We Shall Overcome”
But John Brown knew what freedom was and he died to win us some
O the movement’s moving on.


Many noble dreams are dreamed by small and voiceless men
Many noble deeds are done the righteous to defend
We’re here today, John Brown, to say we’ll triumph in the end
O the movement’s moving on