Two Years And One Song Later

Guerre nei Balcani negli anni '90
Da/From: "We Are Denied, They Deny It" 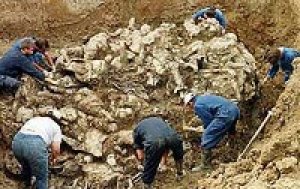 Fosse comuni a Srebrenica
Tuesday May 18th is a day in history
It's a day that has been contantly repeated for years and years
A day no more or less significant than any other day
It's only a blur in the endless carnage and suffering
That possesses the stinging similarity to the Nazi holocaust
These atrocities, however, are happening right now
It's just another day of ethnic cleansing in Bosnia
Ethnic cleansing is the Serbian invented euphemism
Describing the atrocities being committed against Muslim and Croatian civilians
The war that began in April 1992 was predictable
What was not so predictable was the cold-blooded murder of civilians,
Nor was the massive deportation in over crowded cattle cars
Of trains to concentration camps
Upon arrival at these camps prisoners are sheared like sheep
Denied medical attention, food and shelter many die in these camps every day
The grass has all been ripped out to eat
When it rains prisoners find themselves standing up to their knees in mud
Only a handful of these prisoners bore arms against the Serbian soldiers
The Serbian government has given orders that special treatment be shown
To healthy women between seventeen and forty years of age
Tens of thousands of these young girls and women receiving this special treatment
Were systematically raped with the sickening plan of impregnating them with Serbian seeds
And making them bare a stranger, which is then to be taken away
The world strongly stated "Never Again" after World War II
This may be the reason why most of the world seems to be ignoring this modern day genocide
Tuesday May 18th, 1993 ws the date on the newspaper that held the gruesome picture of
A woman holding a skull that once belonged to a loved one
This single picture outraged me and opened my eyes to the ethnic cleansing
I had previously overlooked as just another war?
It was a slap in the face that I still feel to this day
A constant reminder of the pain caused by human ignorance and greed
Almost two years and one song later and nothing's changed, except for the death toll
How much longer will the people sit silently by... as history repeats?