Fox News Is My Muse 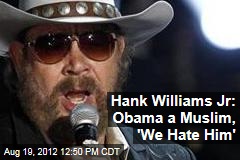 Ironicamene dedicata a Hank Williams Jr., il figlio del famoso cantante country (e cantante a sua volta) famoso per essere un fervente repubblicano e difensore dei valori tradizionali contro quell'estremista di Obama...
I thought I’d gone to the well, boys, one too many times
Thought I’d run out of songs, thought I’d run out of lines
I’d said me a mouthful, sang all that could be sung
so after so much brayin’ I thought this donkey was done

But then I stopped by the Snake Pit to have me a beer
And what I seen in that bar, boys, shot me all full of fear
Gave me new grounds for puttin’ pencil to paper
and firin’one last round afore meetin’ my maker

I saw real Americans telling the truth and Republican patriots raising the roof
The Bible in hand, boys, they were taking a stand and defending the Constitution...

Now I got nothing ‘gainst democracy, but seein’ the new lay of the land of the free
I had me a vision, boys, of old Germany and took a little look back at history

So I had to write this song...
I’m Paul Revere with a guitar
I’m writing to right the wrong...
cause you can only push a good man so far

I saw it in that bar, lord, up on that screen:
The president’s a racist who hates vanilla ice cream
He’s a foreign-born progressive with a arab name
yeah, all his basketball buddies probably call him Hussein