What is the World Coming To?
"1972" The Musical
Book, Music, and Lyrics by Clark Ford 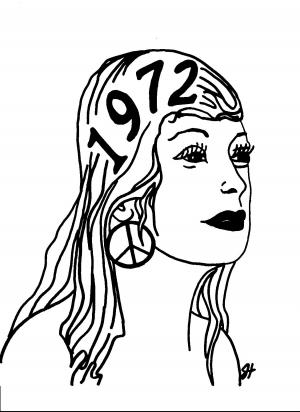 “1972” is a 3-act comedy/drama that explores personal and societal changes in that year through the experiences of the "O'Clark" family:  The father (Robert) is a conservative with a sense of humor who likes Archie Bunker; the mother (Maureen) is exploring women’s liberation;  Marnie, the daughter, is taking classes in feminism and is questioning her religion; and Bob, the son, is in a fraternity and pursuing the American Dream. The sparks fly when Janice, a free-loving hippie, comes on the scene, and both Bob and Marnie are attracted to her...

The year 1972 brings many challenges to the O’Clark family living somewhere in suburban America.  Act I opens before dinner on the day before college classes begin with the mother, Maureen, playing a composition she wrote for the piano,“Mesmerizing”.  Her husband, Robert, sings “Brave New World” about the state of the world. Maureen sings the “Blessing” before dinner. Later, upstairs in the hall between their rooms, 19-year-old daughter Marnie sings “Brave New World” 1st Reprise” to her 20-year-old brother Bob.  In his own room, Bob sings “Sexy Devil,” and then Marnie in her room sings “You’re Missing Me” about her narcissistic boyfriend.  A few weeks later, Marnie brings a friend, Janice, home to work on a project for their feminism class.  Janice sings “True Equality” while Maureen listens unseen.  Bob recruits Janice to play guitar with him and Marnie in their band, and sings “Baby It’ll Be Alright.”  Maureen reveals in a phone conversation that she is tired of being a housewife, and sings “Housewife’s Blues.” Robert cheers her up with their love long, “Meant to Be.”  Later, Marnie’s boyfriend stands her up, and the family sings “He’s a Loser.” Marnie dumps her boyfriend.  Two weeks later, the family helps Bob write a 50’s Halloween song for his fraternity, and they sing “Spiderwebs in my Hair.”  Later that night smoking a joint in Marnie’s room, she and Janice tease each other about finding other women attractive.  Janice reveals that she is pregnant, and the father, who is a gay friend,  is in Vietnam.  She sings “Baby it’ll be Alright” to her baby.
Act II opens with Bob attempting to woo Janice with his song “Outasight.” Bob moves to the frat, and Maureen lets Janice move in to his old room. Janice and Marnie sing “Mesmerizing” separately (as a duet) in their rooms.  The next morning Robert suggests the family attend church, but Marnie sings “What Kind of God?.”  Maureen espouses women’s liberation, and sings “Who am I?”   Janice reveals that she is pregnant.  Robert sings “Patriarch’s Blues.”  Later, with both parents off on a weekend trip to sort out their marriage, Marnie and Janice openly sing “Mesmerizing” to one another.  When the parents return, Robert announces he will move out for a few weeks, and Janice and Marnie announce they are a couple.  Maureen sings “Brave New World” 2nd Reprise.
Act III opens with Thanksgiving.  The entire family has gathered including Janice.  Robert has taken a room in a boarding house, but wishes to mend relations with Maureen.  He sings “A Fine Irish Lass” about their relationship.  Marnie asks for acceptance of her relationship with Janice, but Robert sings “What Kind of Girl?”  The family sings “Blessing” as they sit down for dinner.  A few days later, a phonecall reveals that the father of Janice’s baby has been killed in Vietnam.  She sings “You Live in Me.”  A week later, Robert and Maureen patch up their relationship over a candlelight dinner.  They sing a reprise of “Meant to Be” as a duet.  Maureen tells Robert to come for Christmas only if he can accept the whole family.  A few days later, Bob finds Robert at the lake near the hunting lodge.  Robert sings “Why isn’t it Simple?” The final scene is Christmas Eve, and Marnie is anxious to see if her Dad will come.  The doorbell rings but it is only neighbors delivering holiday treats.   Marnie sings “I’m Missing Him.” Finally, the doorbell rings and it is Robert.  He and Marnie agree to disagree about her relationship, and all sing the final reprise of  “Brave New World.”
Opening number for Robert, the father in the musical 1972. This is a recurring theme in the musical.

What is the world coming to?
Have you heard the news today?
More bombing in Vietnam
More taxes we'll have to pay.

What is the world coming to?
Why can't they leave us alone?
Now they are splicing genes in a tube
Next they'll be making clones!

It's a Brave New World
We have to face
There's no turning back the clock
Everything is changing, or being replaced
Doctor now is Mister Spock!

What is the world coming to?
How will it all turn out?
Overpopulation, nuclear missels
Famines, floods, and drought.

What is the world coming to?
What will be our country's fate?
President Nixon might be involved
In a crime they call Watergate.

It's a Brave New World
We have to face
There's no turning back the clock
Everything is changing, or being replaced
Doctor now is Mister Spock!

First reprise
Introduction to Marnie's character in the musical "1972", and how she differs from her dad who sang Brave New World as the opening number.

What is the world coming to?
How can we go on this way?
More bombing in Vietnam
Clear-cutting forests every day.

What is the world coming to?
What will be our country's fate?
Poverty, injustice, greediness and war
Discrimination and racial hate

It's a Brave New World We have to face
But we're programmed to repeat the past
We're taught to ignore our consciousness
It's 1984 at last!

Slow reprise
Maureen's slow reprise of Brave New World when her husband leaves in the musical "1972."

What is my world coming to?
Did you hear the news today?
My little girl has gone astray
My husband has gone away

What is my world coming to?
What will be my fate?
Should I back down and turn around
Before it's way too late?

Third reprise
Finale song in the musical "1972" sung by the cast.

What is the world coming to?
Every day there's something new
Where do we stand? What do we believe?
What is it we should do?

What is the world coming to?
Will we find a way to cope?
Love and life have been reaffirmed
Now we have reason to hope

It's a Brave New World we have to face
There is no return to the past
We must help each other keep up with the pace
Of change we must embrace at last!