>>> Ireland and the Spanish Civil War 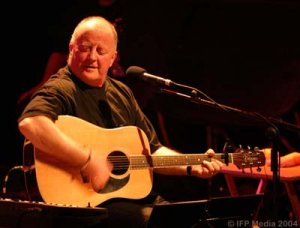 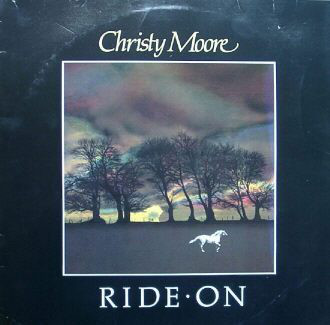 The word came from Maynooth, "support the Nazis"
The men of cloth failed again
When the Bishops blessed the Blueshirts in Dun Laoghaire
As they sailed beneath the swastika to Spain

This song is a tribute to Frank Ryan
Kit Conway and Dinny Coady too
Peter Daly, Charlie Regan and Hugh Bonar
Though many died I can but name a few 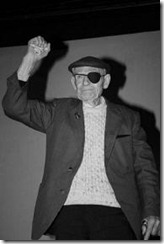 Ireland and the Spanish Civil War
from this page 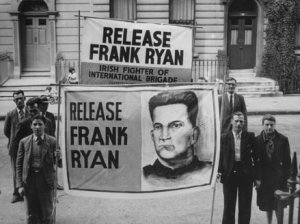 Irish involvement in the Spanish Civil War has been covered by a number of books, beginning with Michael O'Riordan's 1979 book, The Connolly Column. This was followed, 20 years later by two others (see below). These books have resulted in increased research into the Irish role in the war leading to new details being found about those involved.


In 1936 General Franco, of the Army of Africa, invaded Spain. He planned to overthrow the democratically elected centre-left government. He hoped it would quickly fall, but backed by the working class it fought back, defeating the initial surge by the fascists, leading to a three year Civil War.

From the start, Hitler's fascist Germany backed Franco's Nationalists. One week into this civil war, 20 Junker transport planes helped move Franco's army and Mussolini sent 12 bombers. By early 1937 Italy had sent over 70,000 'volunteers'. With the rise of fascism across Europe, this military support led to responses by the Left, including over 35,000 men and women who have gone down in history as the International Brigade. 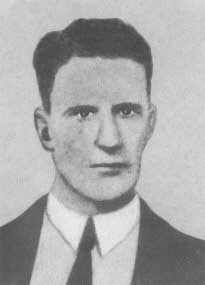 Kit Conway.
Irish reaction to the Civil War is unique, because not only were there republican volunteers, but Ireland also sent genuine volunteers for Franco. Eoin O'Duffy, the Blue Shirts' leader and ex-head of the Garda, saw in this an opportunity to revive his flagging status. The Catholic Church raised funds for the Nationalists and the Irish Christian Front brought thousands out against communism. With this widespread mood it was easy for O'Duffy to recruit men. A generalised view of O'Duffy's Bandera was that they were all fascists. I would contend that the 700 plus men were definitely right-wingers, reactionaries, but only a minority were outright fascists. The fascists included people like O'Duffy, Thomas Gunning and John Muldoon. The impression was that this Brigade was going to be militarily involved to defend the Catholic Church and oppose communism. 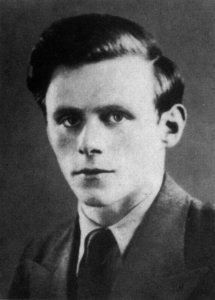 Charlie Donnelly.
The reality was something different. By February 1937 over 700 men were sent to Spain. Their time in Spain was on a relatively quiet front, engaging in only three battles. One was a case of friendly fire with two Irish dead; on another occasion they were being sent forward against substantial odds. After considering the likely casualties the Bandera effectively rebelled and refused to go into action. It is hardly surprising that shortly after this the Fascist military command accepted the suggestion that the Irish should be withdrawn! After six months in Spain the men decided that they wanted to go home, leaving 16 volunteers who stayed and fought. It does say something that of the Bandera's 700 odd volunteers, three died fighting the Reds. Of the 16 who stayed, another three died as they were actually engaged in battle.

On their way out the Bandera's volunteers were cheered by large crowds, blessed by Bishops, praised by the Irish Independent and the Irish News. After the Spanish Civil War they disappeared from the scene.

Liam Tumilson.
The contrast with the International Brigade could not be greater. The Left in 1930s Ireland was a marginal force. The Communist Party had fewer than 100 members; the Republican Congress had fallen apart. The IRA broadly had a militaristic, right wing leadership opposed to any IRA volunteer fighting in any foreign war. Despite its small numbers, the Left from Ireland can be proud of its role in Spain's defence.

Michael O'Riordan, a veteran of the International Brigade and a life long member of the CPI, wrote The Connolly Column. This was a good attempt, based on the limited archives then available. He drew together a list of 144 volunteers. Today, after several researchers have worked through other archives now available, the list of confirmed Irish volunteers stands at over 275. [Confirmed Irish means that they were either born here or had one Irish parent and that more than one source has been used to confirm they were in Spain.] Although O'Riordan had been in Spain and was in contact with other survivors, his list contained a number of mistakes and omissions. That is probably due to his lack of archives. But it is unlikely to be a coincidence, given O'Riordan's Communist Party background that many of the Irish volunteers who fought with non-Stalinist left groups, like the POUM, the Anarchists and the Socialist Party were omitted.

One misconception about the Irish volunteers is that they served in one unit, the Connolly Column. The reality is that in January-February 1937 there was a row in the British Battalion when one officer, George Nathan, was revealed to have been linked to the Black and Tans in Limerick, leading to the withdrawal of the Irish to a separate unit in the Lincolns. The Connolly Column in reality only lasted for a few weeks due to heavy fighting, with the majority of the men being wounded or killed. After this new arrivals went into a mix of units. The 275 Irish volunteers served in the British Battalion, the Lincolns and the Canadian unit, the Mackenzie-Papineau (MacPaps) as an overwhelming majority of the Irish volunteers had traveled from Britain, America, Canada and even Australia. 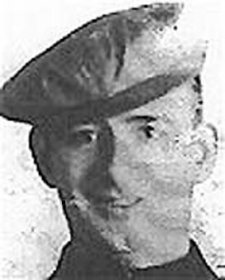 Jim Stran[n]ey.
The Irish Bandera suffered a fatality total just over 1%. The International Brigade volunteers saw a fatality rate of nearly 27%, with 74 dead. The difference is that from the moment the first volunteers arrived, until the withdrawal of the International Brigade in Sept. 1938, they were in battle. One of the first Irish killed was Tommy Patten, from Achill. Arriving in October he quickly joined in Madrid's defence, going missing in Action, presumed killed, on 16-17 December.

Even as things wound down casualties occurred. Negrin, Prime Minister of Spain announced the withdrawal of the International Brigades on 21 September 1938. On the night of 22-23 September there was a fascist attack. Jack Nalty, George Gorman, Henry McGrath and Liam McGregor died. The extent of this battle can be grasped from the numbers. The battalion went into action with 377 soldiers, including 106 British or Irish. By the 24 September there were 173 left, 58 either British or Irish. The other 204 were either dead, missing or POW's. A traditional image of the International Brigades is that it was composed of Communist Party members and fellow travellers. A large section of the organised Irish were in some CP or other, remember a lot traveled from America or Canada. Despite this dominance there were a number of other Irish socialists and anarchists in Spain.

Patrick Trench, later active in the first Irish Trotskyist group, the Revolutionary Socialist Party, was a member of the Marxist Group inside the British Independent Labour Party before Spain, explaining his links to the anti-Stalinist POUM. [Incidentally another leading member of the RSP was also in Spain. That was Bob Armstrong, a Scottish member of the CPGB who joined the Marxists after Spain, with the result that he faced slanders in the London labour movement.] Also in the POUM were Belfast men Pat O'Hara and John Donovan with James Farrell from Dublin. Joe Boyd and Fred McMahon, members of the Socialist Party in Belfast - the local equivalent of the ILP in Britain - went in Oct. 1936 with the Scottish Medical Unit, were captured by the fascists and repatriated in November. 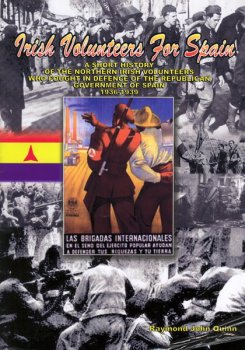 Captain Jack White is famous for his role with the Irish Citizen's Army. He'd also been in Spain from late 1936 with British Medical Aid before giving his support to the anarchist forces. Afterwards he was active in fund-raising and publicity for the anarchists in London. Pat Reade had been on the Left of the first Irish Communist Party in the early 1920s. Moving to America he joined the anarcho-syndicalist Industrial Workers of the World. In Spain he was known as brave but reckless. Another veteran said that because of his war experiences Reade was the drillmaster of his group. The problem was that he didn't believe in orders! "As a result, our group would often sit around in a circle, listening to Pat relate his experiences." Reade refused to take or give orders, opposing discipline "of any kind....as we'd march to town, Pat would always, intentionally, be out of step." He was forced out of the American units for his political views but continued the fight.

There was one fatality among the five left women in Spain. Nurse Ruth Ormsby died in a fire at a Red Cross flat in Barcelona. All of the other eight women, four with the O'Duffy's Bandera, served as medics or administrators.

The overall dedication and sacrifice of these men and women should not be distorted by the role of Stalinism internationally or by the individual actions of the minority of men of who failed to live up to expectations. There were some deserters, a few cowards, but they were a small minority, people like Charles McGuinness of Derry an adventurer. I mention this because some of the archives and books create an impression of wholesale desertion and discipline issues. I would contend that the majority of the men went out to fight for ideas they believed in. Unfortunately in some cases the reality of war was too much for some who bolted. Some 'deserters' went back to fight again. Paddy Murphy of Belfast was in Spain from January to March 1937, went to London, came back again in May 37, and was jailed for desertion. He then stayed to fight until September 1938. Hardly a coward.

The majority consisted of men like Mick Lehane and Mick O'Riordan. Lehane went out three times, being wounded several times and was commended for his bravery. Lehane continued the anti-fascist struggle, dying during World War Two in the merchant marine. O'Riordan wrote the book and failed to mention that he himself was commended, refusing to leave his machine gun position, despite being wounded, until all his men were safely evacuated.

Those who fought against fascism will always be remembered. NO PASARAN! 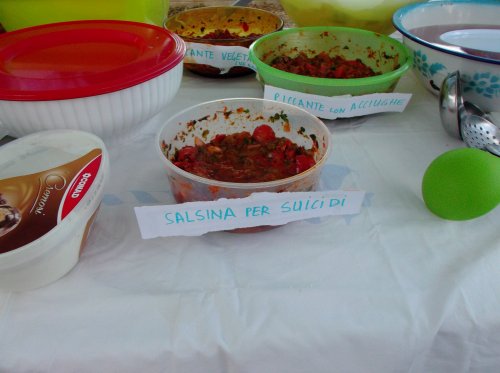