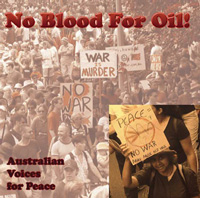 Excuse: The Gulf War II. Who thought it could be allowed to happen again?
So where exactly are all the WMDs?
But the world is a safer place, of course...
There's children drooping dead just to keep me free
but I'm not convinced that it's really for me
and I know now there's accumulation to protect
yes I know now why you are easily erect
yes I know now that you like to keep it in the family..

Lying crooked smile Saddam has gotta go'
well it must be true 'cos the TV told me so now
can't you smell a rat in a suit?
and I know we don't ask questions only shoot
don't you know now -that there's more than just your head in the sand
(YES THERE'S OIL)

Spit your spears of illegitimacy
Whenever there's talk of sovereignty
So this is the End of History(1)
And this is how to spread democracy..

(1) The Francis Fukuyama's theory..
The advent of a particular political and economic system as a signal of the end point of humanity's sociocultural evolution and the final form of human government, as posited by Thomas More in Utopia, Georg Wilhelm Friedrich Hegel, Karl Marx and Francis Fukuyama.
The End of History? is a 1989 essay by Francis Fukuyama published in the international affairs journal The National Interest.