Daddy What Did You Do in the Strike?‎ 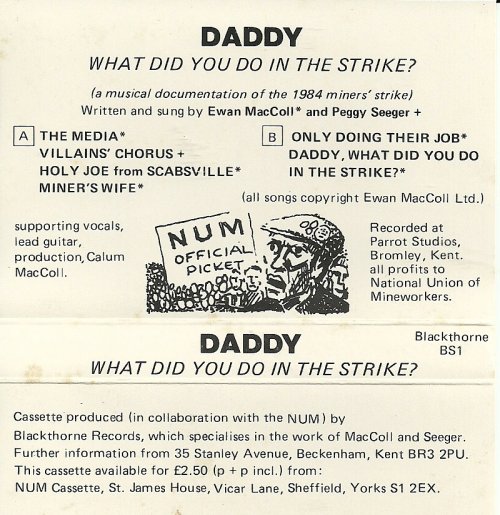 ‎Daddy What Did You Do In The ‎Strike?, copertina dell’audiocassetta che circolava tra i minatori inglesi durante lo sciopero del ‎‎1984/85 che durò per più di un anno e che si concluse con la sconfitta del NUM e dei lavoratori…‎
It was in the year of '84 shit really hit the fan
When 'Mac the Knife' MacGregor, Maggie Thatcher's hatchet-man
Said, Another twenty pits will have to close to meet the plan
And we'll dump another twenty thousand miners

Daddy were you with the first of the first?
Did you tell the NCB to do its worst
Or did you save your lily liver
Sell the union down the river
A scab, a blackleg, one forever cursed?‎

When Arthur Scargill heard the news he cried, This Yankee slob
Is a gift from Cowboy Reagan and he's here to steal our jobs
Do an axe-job on the union for the crummy Thatcher mob
But we'll show him what it means to be a miner

Daddy did you man the picket-line?
Did you fight to save the future of the mines
Or did you take the wrong direction?
Did you squeal for police protection?
Did you let 'em see your india-rubber spine?‎

Well the Yorkshire lads came out on strike and said, It's evident
The only way to stop MacGregor and the government
Is to bring the lads out everywhere from Scotland down to Kent
And we'll show 'em what it means to be a miner

Daddy what did you do in the strike?
Did you stand there with your mates and join the fight
Or did you show a yellow belly
Spill your guts out on the telly?
Did you let the bosses fill you full of shite?‎

Daddy did you march at the head?
Did you stand there on the picket-line unfed
Or did you sell your mates to have a
Fortnight on the Costa Brava?
Did you choose a two-week holiday instead?‎