When Will The Madness End?

[2002]
Lyrics & Music by Sara Marlowe
Album: A World to Win: Songs from the Struggle for Global Justice 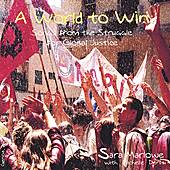 An anti-war song specifically about the about 'war on terror' - also included on the "ONE BIG NO" CD compilation released by Artists Against War
(This song was written just after George Bush started to bomb Afghanistan, in "retaliation" for the attacks on the World Trade Centre and the Pentagon on September 11th. It is also about how other struggles, such as the Intifada in Palestine and imperialism in Africa are all connected and a struggle against the same system - capitalism)
"Operation Enduring Freedom" AKA more war!
So the bombs are dropping once again
In the name of enduring freedom, but to what end
Exactly whose freedom are they fighting for
This so-called anti-terror war

Oh Afghanistan,
Who are the ones who'll be left behind
To face the bombs and the gunfire
Is it another Middle East genocide..

Oh Palestine,
A forgotten story of a war a long time begun
In the name of God or the name of Money
That's forced them on the run..

If you think divide and conquer is the answer
You've gotta ask who pays the price
Is it the ones who tell them they can't live together
Or is it their strength to resist sacrificed!

Oh Africa,
Another thousand people will have died by the end of this song
Strangled by a debt that's owed to the wealthy
In their profit marathon..