The Battle Of Epping Forest 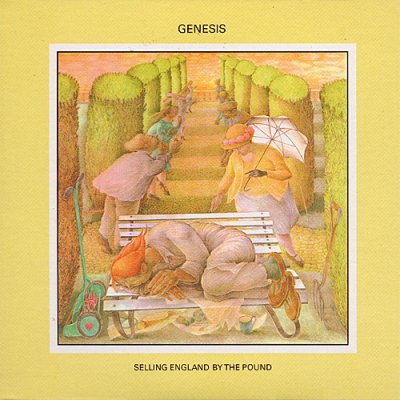 The Battle of Epping Forest is a song by English rock band Genesis, appearing on their 1973 album Selling England by the Pound . At 11 minutes and 49 seconds long, it is the longest song on the album.

Inspired, according to the liner notes, by a news story about two rival gangs' territorial battles, the lyrics play out as such, featuring characters such as "Mick the Prick" and "Bob the Knob" as they battle for turf. The song is particularly characteristic for singer Peter Gabriel's changing of voices for different characters as well as the frequent changes in tempo.

The song was performed live during the tour to support Selling England, featuring Gabriel moving around the stage telling the story, and even "flying" (he was attached to a harness) early on before this was dropped for safety reasons.

The band's feelings about the song are mixed. In Hugh Fielder's The Book of Genesis, the band members seem to agree that, although the song has a lot of good ideas, it suffers from having too many lyrics that don't always fit the music and an altogether too-busy arrangement. The song was dropped from the band's setlist after the Selling England tour, whereas other songs from the album -- such as "I Know What I Like," "Firth of Fifth" and "The Cinema Show" -- remained in the setlist for many years afterward. - en:wikipedia
Along the Forest Road, there's hundreds of cars - luxury cars.
Each has got its load of convertible bars, cutlery cars - superscars!
For today is the day when they sort it out, sort it out,
'cause they disagree on a gangland boundary.
Yes, they disagree on a gangland boundary.

There's Willy Wright and his boys -
one helluva noise, that's Billy's boys!
With fully-fashioned mugs, that's Little John's thugs,
the Barking Slugs - supersmugs!
For today is the day when they sort it out, sort it out,
these Christian soldiers fight to protect the poor.
East end heroes got to score in...

Coming over the hill are the boys of Bill,
and Johnny's lads stand very still.
With the thumpire's shout, they all start to clout
- there's no guns in this gentleman's bout.
Georgie moves in on the outside left
with a chain flying round his head;
and Harold Demure, from Art Literature,
nips up the nearest tree.
(Here come the cavalry!)

Admidst the battle roar,
accountants keep the score: 10-4.
They've never been alone, after getting a radiophone.
The bluebells are ringing for Sweetmeal Sam, real ham,
handing out bread and jam just like any picnic.

t's 5-4 on William Wright; he made his pile on Derby night.
When Billy was a kid, walking the streets,
the other kids hid - so they did!
Now, after working hard in security trade, he's got it made.
The shops that need aid are those that haven't paid.

"I do my double-show quick!" said Mick the Prick, fresh out the nick.
"I sell cheap holiday. The minute they leave,
then a visit I pay - and does it pay!"
And his friend, Liquid Len by name,
of Wine, Women and Wandsworth fame,
said "I'm breaking the legs of the bastard that got me framded!"

They called me the Reverend when I entered the Church unstained;
my employers have changed but the name has remained.
It all began when I went on a tour,
hoping to find some furniture.
I followed a sign - it said "Beautiful Chest".
It led to a lady who showed me her best.
She was taken by surprise when I quickly closed my eyes.
So she rang the bell, and quick as hell
Bob the Nob came out on his job
to see what the trouble was.
"Louise, is the Reverend hard to please?"
"You're telling me!"
"Perhaps, sir, if it's not too late.
we could interest you in our Staffordshire plate?"
"Oh no, not me, I'm a man of repute."
But the Devil caught hold of my soul and a voice called out "Shoot!"

To save my steeple, I visited people;
for this I'd gone when I met Little John.
His name came, I understood,
when the judge said "You're a robbing hood."
He told me of his strange foundation,
conceived on sight of the Woodstock nation;
he'd had to hide his reputation.
When poor, 'twas salvation from door to door.
But now, with a pin-up guru every week,
it's Love, Peace & Truth Incorporated for all who seek.

He employed me as a karmacanic, with overall charms.
His hands were then fit to receive, receive alms.
That's why we're in

In with a left hook is the Bethnal Green Butcher,
but he's countered on the right by Mick's chain-gang fight,
and Liquid Len, with his smashed bottle men,
is lobbing Bob the Nob across the gob.
With his kissar in a mess, Bob seems under stress,
but Jones the Jug hits Len right in the mug;
and Harold Demure, who's still not quite sure,
fires acorns from out of his sling.
(Here come the cavalry!)

Up, up above the crowd,
inside their Silver Cloud, done proud,
the bold and brazen brass, seen darkly through the glass.
The butler's got jam on his Rolls; Roy doles out the lot,
with tea from a silver pot just like any picnic.

Along the Forest Road, it's the end of the day
and the Clouds roll away.
Each has got its load - they'll come out for the count
at the break-in of day.
When the limos return for their final review, it's all thru'
- all they can see is the morning goo.
"There's no-one left alive - must be draw."
So the Blackcap Barons toss a coin to settle the score.
confronta con l'originale
Lingua: Italiano
Versione italiana di Armando Gallo
LA BATTAGLIA DELLA FORESTA DI EPPING