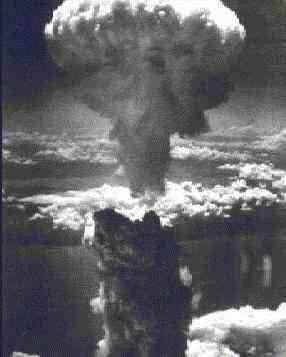 Probably the best known song to emerge from the Los Angeles office [of "People's Songs of California"] was Vern Partlow's Atomic Talking Blues or Old Man Atom. In 1958 Partlow recalled the song was inspired by a story assignment for The Los Angeles Daily News.
"I was assigned to interview various atomic scientists who visited the city to speak about the atom bomb ... I met with them and talked with them and I became a little alarmed, too. at what they were saying. And I agreed with them that something new had happened in the world -- something that would he with us a long time.
They said that if the atomic question were not settled amicably, the failure to do so might be heralded to the universe in the appearance of a bright new star. I think possibly they were right.
And so one evening I decided maybe there could he a song about the atom bomb - a folk song about the atom bomb. This is a rather ambitious folk song, but I thought it might he done.
At first I thought I might do something that will be very educational and very simple and take it right down to the sidewalk and maybe even do a Mother Goose-type song about the atom bomb - something you could call 'Jack and Jill Went Up.' Then I thought well, no, we'd reach more people if we had a motion picture-type title such as 'One Of Our Hemispheres Is Missing.' Then I thought we don't want to leave the church people out. We might pick them up, too. We should have something spiritual. So I thought of a title such as 'Praise The Lord And Pass The Geiger Counters.' But finally I called it 'Old Man Atom.'

The song was written in 1945 and in 1950 it was published by a Hollywood commercial music publisher. It was recorded in six or eight different versions on records. It was being played on radio stations throughout the country and was the subject of rave interviews in various trade magazines. And then it suddenly disappeared from all the networks."

Sam Hinton, a marine biologist who primarily collected and sang folksongs for his own enjoyment, recorded Old Man Atom in 1950 for ABC Eagle, a small California independent label. Influential New York disc jockey Martin Block played Hinton's record on his 'Make Believe Ballroom.' Overwhelming listener response prompted Columbia Records to acquire the rights for national distribution. From all indications, it promised to be one of the year's biggest novelty records. RCA Victor rush-released a cover version by the Sons of the Pioneers.

Country singer Ozzie Waters cut it for Decca's Coral subsidiary. Fred Hellerman - then contracted to Decca as a member of the Weavers - waxed it for Jubilee under the pseudonym 'Bob Hill.'
Bing Crosby was reportedly ready to record Old Man Atom for Decca when right-wing organizations began attacking Columbia and RCA Victor for releasing a song that reflected a Communist ideology.
"Rabbi Benjamin Schultz, national director of the Joint Committee Against Communism, conceded last night that members of his committee, acting as individuals, had made known their feelings of opposition to the song to the recording companies," according to a New York Times report on September 1, 1950.
"Those who protested against the song's issuance on records insisted that it parroted the Communist line on peace and reflected the propaganda for the Stockholm 'peace petition.' Mr. Partlow said yesterday, according to an Associated Press dispatch from Los Angeles, that his song was 'not part of the Stockholm or any other so-called peace offensive.' He added, 'It was written five years ago long before any of these peace offensives.'"
Buckling under pressure, both Columbia and RCA Victor withdrew Old Man Atom from distribution.
Well, I'm gonna preach you a sermon 'bout Old Man Atom,
I don't mean the Adam in the Bible datum.
I don't mean the Adam that Mother Eve mated,
I mean that thing that science liberated.
Einstein says he's scared,
And when Einstein's scared, I'm scared.
Hiroshima, Nagasaki, Alamogordo, Bikini...

Here's my moral, plain as day,
Old Man Atom is here to stay.
He's gonna hang around, it's plain to see,
But, ah, my dearly beloved, are we?
We hold these truths to be self-evident
All men may be cremated equal.

The science guys, from every clime,
They all pitched in with overtime.
Before they knew it, the job was done;
They'd hitched up the power of the gosh-darn sun,
They put a harness on Old Sol,
Splittin' atoms, while the diplomats was splittin' hairs . . .

Then the cartel crowd put on a show
To turn back the clock on the UNO,
To get a corner on atoms and maybe extinguish
Every darned atom that can't speak English.
Down with foreign-born atoms!
Yes, Sir!

But the atom's international, in spite of hysteria,
Flourishes in Utah, also Siberia.
And whether you're white, black, red or brown,
The question is this, when you boil it down:
To be or not to be!
That is the question. . .
Atoms to atoms, and dust to dust,
If the world makes A-bombs, something's bound to bust.

No, the answer to it all isn't military datum,
Like "Who gets there fustest with the mostest atoms,"
But the people of the world must decide their fate,
We got to stick together or disintegrate.
World peace and the atomic golden age or a push-button war,
Mass cooperation or mass annihilation,
Civilian international control of the atom -- one world or none.
If you're gonna split atoms, well, you can't split ranks.

It's up to the people, cause the atom don't care,
You can't fence him in, he's just like air.
He doesn't give a darn about politics
Or who got who into whatever fix --
All he wants to do is sit around and have his nucleus bombarded by neutrons.

So if you're scared of the A-bomb, I'll tell you what to do:
You got to get with all the people in the world with you.
You got to get together and let out a yell,
Or the first thing you know we'll blow this world to...
Hiroshima, Nagasaki, Moscow, too,
New York, London, Timbuktu,
Shanghai, Paris, up the flue,
Hiroshima, Nagasaki...
We must choose between
The brotherhood of man or smithereens.
The people of the world must pick out a thesis:
"Peace in the world, or the world in pieces!"