Noa supports Israeli war against Gaza people in an "oper letter": "I can only wish for you that Israel will do the job we all know needs to be done, and finally RID YOU of this cancer, this virus, this monster called fanaticism, today, called Hamas." Then she accepts to participate in a charity event for Gaza children.

VERGOGNA, IPOCRITA! SHAME ON YOU, HYPOCRIT!

The movie "La vita è bella" by Roberto Benigni is one of the most beautiful movies I’ve ever seen. It made me laugh and cry uncontrollably and it’s haunting beauty stayed with me months after I’d seen it. I think Benigni’s great achievement in this film is in showing that happiness, optimism and hope are strong survival forces that even the horrors of the Holocaust could not eradicate. Israel is living proof of that concept, and that’s why the movie affected us so deeply. Needless to say, when we were approached to write lyrics for one of Nicola Piovani’s beautiful melodies from the award winning soundtrack, we were overjoyed and put our hearts lovingly into the task. The result is this song. When Benigni himself called to say he was crazy about it, we nearly had a heart-attack. It is a true honor for all of us to have a small part in this great masterpiece. 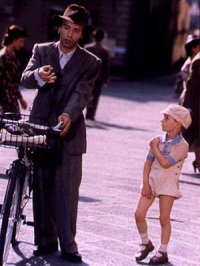 (dal film La vita è bella)
Smile, without a reason why
Love, as if you were a child
Smile, no matter what they tell you
Don’t listen to a word they say
'Cause life is beautiful that way

Tears, a tidal-wave of tears
Light that slowly disappears
Wait, before you close the curtain
There’s still another game to play
And life is beautiful that way

Here, in his eyes forever more
I will always be as close as you remember from before.

Now, that you're out there on your own
Remember, what is real and what we dream is love alone.

Keep the laughter in your eyes
Soon, your long awaited prize
We'll forget about our sorrow
And think about a brighter day
'Cause life is beautiful that way 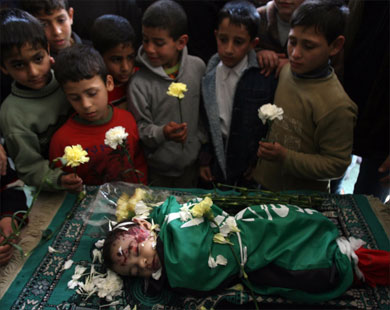 We, the undersigned, demand that Achinoam Nini be barred from participating in the Gaza charity event scheduled for Friday, January 23, 2009 at "Levontin 7" in Tel Aviv

"I can only wish for you that Israel will do the job we all know needs to be done, and finally RID YOU of this cancer, this virus, this monster called fanaticism, today, called Hamas."

Today, after her wish has been fulfilled, and the Israeli army "GOT RID" of over 1300 Palestinians, over 400 of them children, over 100 of them women, and injured more than 5000, Ahinoam Nini wants to share the stage at a charity performance for the sake of Gaza's children?

There is no limit to your hypocrisy, Noa. You supported the war which orphaned these children, and now you want to play "Mama Theresa" and help them out? How cynical can you be? Thousands of children were crippled physically and emotionally for the rest of their lives in a war that not only did you not protest, you vocally justified. Maybe you can increase your popularity and try to wash your bloody hands by making headlines on the backs of these children, but you will not be able to clear your dirty conscience.

Not unless you recognize that an occupier has no moral right to tell an occupied people what to do, including what leadership it can or cannot democratically elect. Not before you recognize that the real "virus" or "cancer," to use your ill-willed words, the "monster" is the ongoing occupation and the oppression that comes with it. Anything it spawns, is its own doing. The real fanatics around here, Noa, are the people who think that they have the right to inflict so much harm and damage and pain to a besieged and beleaguered and disenfranchised people.

Singers Noa and Mira Awad, meant to perform at fundraiser concert for Gazans injured in Operation Cast Lead, call off participation following pressure on organizers to have Noa take back statements made in open letter to Palestinians

Singers Achinoam Nini (Noa) and Mira Awad, who were meant to take part in a fundraiser concert for Gazans injured in Operation Cast Lead on Friday, have cancelled their performance due massive pressure placed on the event's organizers.

The reason behind the pressure is the open letter to the Palestinians written by Noa on the last week of the operation.

Part of Noa's letter read: "Today, I know that deep in your hearts you wish for the demise of this beast called Hamas who has terrorized and murdered you, who has turned Gaza into a trash heap of poverty, disease and misery. Who in the name of "Allah” has sacrificed you on the bloody alter of pride and greed.

"I can only wish for you that Israel will do the job we all know needs to be done, and finally rid you of this cancer, this virus, this monster called fanaticism, today, called Hamas. And that these killers will find what little compassion may still exist in their hearts and STOP using you and your children as human shields for their cowardice and crimes."

"Achinoam Nini's participation (in the fundraiser) without her showing deep remorse for her position, blocks the message of protest against Israel's systematic, intentional brutality, and its murder and injury of thousands of civilians, including hundreds of children," the petition read.

The signatories stressed that without this message, the concert for Gaza's children, that aims to be more than just an act of compassion and pity, will be tainted.

"Nini's performance will strengthen the hypocritical position of Israel's leaders, that express their regret over children who were killed 'by accident' and then offer to help rebuild Gaza," the letter, that was addressed to the concert's organizers, continued.

The organizers told Noa the event was centered around the question of accountability for the State of Israel's actions in Gaza, and wanted to be sure the singer identified with this cause.

Noa ultimately cancelled her participation in the event.

'You can't kill Gazans and cry over them too'

In response to Noa's decision to cancel her performance, Juliano Mer-Khamis said told Ynet, "The cancellation shows us that Achinoam Nini is not willing to take back the humiliating, degrading letter that she wrote.

"There is nothing more patronizing, arrogant or presumptuous than to tell people who have freely elected one political movement or another, that it is a cancer. One can't help but be disgusted by people who support (Operation Cast Lead) and then buy blankets for the handicapped children that remain alive. You can't kill the Gazans and cry over them too."

Mer-Khamis, who was also one of the initiators of the petition urging Arab singer Mira Awad to withdraw from the 2009 Eurovision, in which she was selected to represent Israel along with Noa, added, "One of the reasons Nini and Awad agreed to participate in this evening, has to do with their manager's desire to relieve pressure on Awad about the Eurovision."

Nini and Awad preferred not to comment. Ofer Pesenzon, their personal manager, said in response, "Achinoam and Mira will not be performing in this event. I do not know Juliano Mer personally, and I have no dispute with him. Everything we have to say will be read tomorrow on the stage by one of the participants."

The show's organizers said, "21 days of bombings have taken many victims and left over 5,000 people injured. Many of them will need ongoing and costly care in the coming years, care that the shaky healthcare system in Gaza cannot provide.

"In order to fulfill the immediate needs of the hospitals, we have decided to collect money to purchase medical equipment and medicine to be transferred to the Strip."